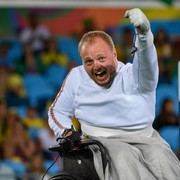 Belarus’ Paralympic champion Andrei Pranevich will compete at the International Wheelchair and Amputee Sports Federation (IWAS) World Cup that starts in Kyoto tomorrow hoping to end 2018 on a high.

The 35-year-old men’s épée category B specialist has described his season, including a silver medal at the 2018 European Championships and a fifth place finish at an earlier World Cup in Warsaw, Poland, in honest terms.

"I estimate my performance in individual competitions in 2018 as bad as all goals have not been achieved,” Pranevich told IWAS.

"Together with my coach we have to analyse the results and to make the correction work in order to improve them.

"In team competitions we have done our best to be ranked seventh and it is quite a good performance."

In order to improve, Pranevich has been training five days per week.

He has also been sparring with athletes from Latvia and Russia as he tries not only to elevate his performance, but also to qualify for Tokyo 2020.

The British fencer beat his rival to the European gold medal in Terni in Italy, in September.

"Dmitri has once again demonstrated that at the moment he is one of the best among us," Pranevich said.

"And I believe that he will gain new achievements and victories and will win new trophies in the nearest future."

Despite having great admiration for Coutya - winner of a  bronze medal in the foil at last month's IWAS World Cup in Tbilisi -  Pranevich’s aims are simple for Kyoto: "Like any athlete, [I want] to win the World Cup in individual épée.

"As for my competitors it is very complicated to say who is the most difficult to compete with.

"The final results will depend upon drawing.

"For me all competitors are equal: I do not divide them into weak and strong ones."

With a career spanning nearly a decade, Pranevich has observed significant changes in wheelchair fencing in recent years.

"A lot of new fencers and nations have now begun practising wheelchair fencing," he said.

"As a result, the competitiveness has increased greatly.

"Fencing tactics and technique have changed.

"The sport calendar now has stable frameworks: the same host countries for staging World Cups, the dates are relatively fixed."

The 2018 IWAS Wheelchair Fencing World Cup in Kyoto is due to last until Sunday (December 16).

It is the second World Cup competition to take place within the qualification period for Tokyo 2020.

A further five World Cups are due to take place in 2019, as well as the IWAS Wheelchair Fencing World Championships in Cheongju in South Korea, from September 24 until 30.