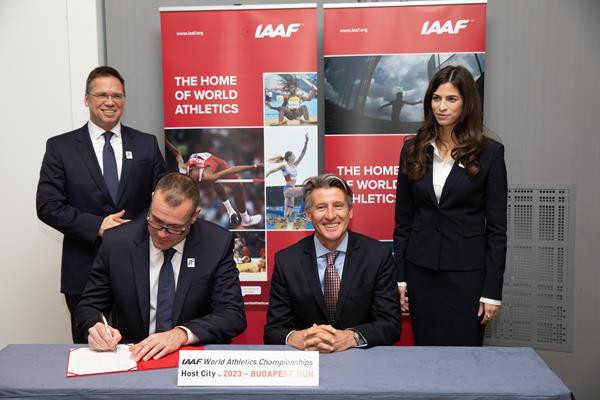 Budapest was today officially confirmed as the host city of the 2023 International Association of Athletics Federations (IAAF) World Championships.

The Hungarian capital was the only candidate under a new model launched by the IAAF which abolished the traditional bid campaign and instead introduced a consultation process.

IAAF President Sebastian Coe had announced in July that Budapest was their preferred choice and that was rubber-stamped today by the ruling Council here.

The main venue of the event will be a new 40,000-seat National Athletics Centre on the banks of the Danube that is currently in the planning phase.

Following the Championships, temporary seating will be removed and only 15,000 seats will remain to fill the void of athletics stadiums in the country.

The venue will serve as a huge boost to both competitive and leisure sports as well as youth development, Budapest officials claim.

"We are delighted to award the 2023 World Athletics Championships to Budapest in Hungary, a country of extraordinary athletic tradition and great experience in organising world-class sports events," Coe said.

"It has been the scene of some of our greatest moments as a sport.

"We are excited about their plans for a new stadium that will become a great legacy for athletics."

A big congratulations to @MartonGyulai the CEO and his team who made a great presentation to the IAAF Council today and have now officially signed the contract for the @IAAFWorldChamps in Budapest 2023 🇭🇺🇭🇺🇭🇺🇭🇺 #ItsComingHomeToEurope pic.twitter.com/sku8DqgAGD

"The victory of this bid is a recognition of all the hard work and success from the past decades in Hungary," Budapest 2023 chief executive Márton Gyulai said.

"The World Athletics Championships is an outstanding opportunity for the entire central European region and for millions of youngsters to establish closer ties with the queen of sports."

The bid for these World Championships was launched following the collapse in early 2017 of Budapest's bid to host the 2024 Olympic and Paralympic Games.

Balázs Fürjes, the Government Commissioner for International Sport Bids in Hungary, who had led that unsuccessful bid, was here as part of the Budapest delegation.

"It is a huge honour that the IAAF trusts the experience and organisational abilities of Budapest and Hungarians," he said

"Budapest has established itself as a major sports capital in Europe.

"The goal is for Budapest to lead the way in delivering sports events in a new, innovative and trendy way.

"It is essential for us to build on the positive experiences gained from hosting recent sports events and to study the right examples from abroad, such as the World Athletics Championships in London in 2017, or the Youth Olympic Games of Buenos Aires earlier this year."