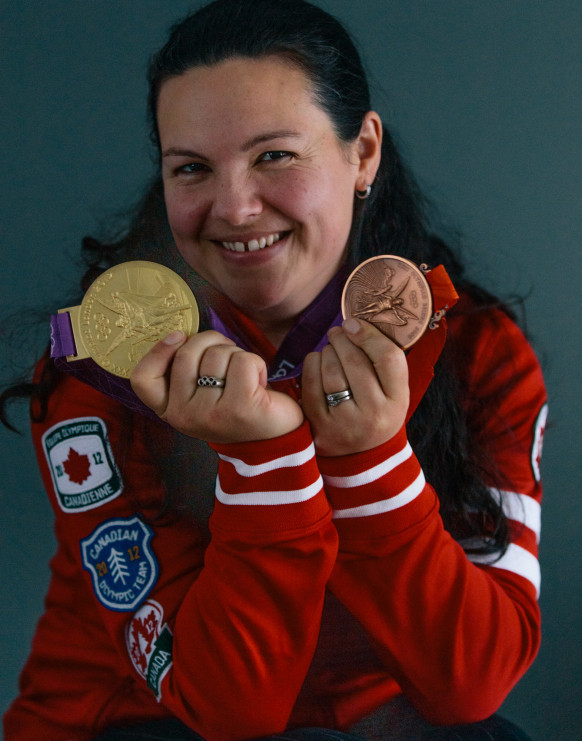 Canadian weightlifter Christine Girard has received Olympic gold and bronze medals from London 2012 and Beijing 2008 respectively during a special ceremony at the National Arts Centre in Ottawa.

The 33-year-old becomes the first Olympic weightlifting champion for her nation, male or female, and the first Canadian to win two Olympic medals in the sport following failed doping tests by her opponents.

She was the original bronze medallist in the women’s 63 kilograms event at London 2012, but was upgraded to gold after Kazakhstan’s Maiya Maneza and Russia’s Svetlana Tsarukayeva were disqualified from first and second place respectively.

Maneza was found to have tested positive for steroid stanozolol and was stripped of her victory in October 2016.

Tsarukayeva, meanwhile, failed for turinabol and it was confirmed in April 2017 that she would forfeit her medal.

Chinese Taipei’s Lu Ying-chi moved up to the silver medal position from third.

"I was a coach and mother of two amazing little humans when I learned that the competitors who finished ahead of me cheated," Girard told the Canadian Olympic Team's official website.

"It wasn’t really a surprise as my sport has a history of doping.

"The surprise was the number of athletes that got caught, from London 2012 and other past Games.

"Not only was my bronze medal upgraded to gold but my fourth-place finish at Beijing 2008 was now a bronze.

"Just like that, I became a two-time Olympic medallist, the first in Canadian weightlifting.

"Obviously, I wasn’t able to celebrate in the moment at the Games and many people were upset for me.

"You lost your moment.

"No one can give you back what you should of have had years ago'.

"And they are right.

"I missed out on a lot of things - support, publicity and money, to name a few.

"Perhaps most importantly, I missed out on the opportunity to showcase weightlifting to Canadians and break stereotypes; to show young girls that it’s okay to want to be strong, that it’s possible and it’s great to be powerful and tenacious.

"But there’s no point thinking about the what ifs.

"What I gained is much more meaningful."

Jeane Lassen was part of Girard's coaching team at London 2012 and presented her with a bouquet of roses to a standing ovation at the medal ceremony.

"My story is proof that it is worth everything to work hard, to believe in yourself and, most of all, to stay true to your values and your passions," Girard added.

"Dreams are within reach when you work hard every day of your life and you allow yourself to believe.

"I grew up believing that it was impossible for a Canadian woman to win an Olympic medal in a sport that is perceived to be only for men and that has a substantial history of doping.

"But here I am, receiving Olympic gold and bronze medals."

"Christine embodies the belief that the value of sport, the value of anything - to individuals, to community - comes from the integrity of it," Tricia Smith, President of the Canadian Olympic Committee and an IOC member, was reported as saying by the Canadian Broadcasting Corporation before the ceremony.

"Applying that in every aspect, in everything you do, is very Olympic."