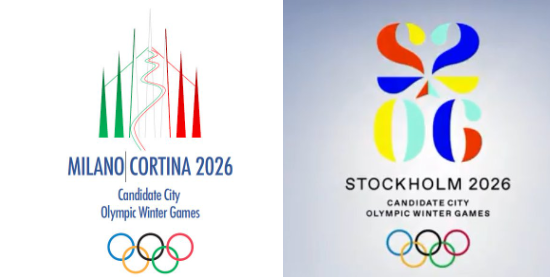 Milan-Cortina d'Ampezzo in Italy and Sweden's capital Stockholm unveiled their bid logos as the two remaining candidates in the race for the 2026 Winter Olympic and Paralympic Games delivered the first public presentations of their plans.

Milan-Cortina were first to present, with Milan Mayor Giuseppe Sala representing the cities involved while President of Veneto Luca Zaia represented the regions of Veneto and Lombary.

Italian National Olympic Committee (CONI) President Giovanni Malago suggested this showed the political support for hosting the Games, labelling the word "together" as the strength of this effort.

"Milano-Cortina is a bid that originates from the territories, from the cities of Milano and Cortina, represented here by the Mayor of Milano, Giuseppe Sala," Malago said.

"It stems from two of the richest and most operational regions of Italy, if not Europe, Lombardy and Veneto, represented here by the Governor of Veneto, Luca Zaia.

"It will be precisely the regions to guarantee the financial support in order to deliver the Games.

"We believe that the winning key of our project is the word 'together'.

"Together, because we unite public and private, tradition and innovation, the efficiency of a great metropolis with the charm of the mountains.

"It is a great display of teamwork with a single goal: to bring the Olympic and Paralympic Games back to Italy."

While details were scarce on venues for the Games, Milan Mayor Sala claimed that Italy’s experience of hosting major events, his city’s "globally recognised brand" and the beauty of the Alps were key strengths of the bid.

He promised that their bid plan would maximise the use of existing or temporary facilities, with up to 92 per cent of venues said to be already be in place.

Sala claimed the Games would deliver a positive impact for local communities, should their bid succeed.

"The joint bid of Milano and Cortina presents the pluses of a global city living an extraordinary golden age and those of the beautiful surrounding Alps," he said.

"Our joint candidacy has the merit to help us limit both the overall budget and the soil consumption - exactly in the spirit of the New Norms.

"This constitutes an invaluable chance to restate the Olympic message in a contemporary fashion, with a very positive impact for local communities.

"Moreover, our project has the inner economic strength of a macro-region among the most successful and prosperous in Europe, it is one of the four so-called ‘engines’ of the continent.

"Milano is growing; the broader territory of the Alpine region is growing, but we are all conscious of the importance of a sustainable growth.

"We see the chance to host the Winter Games as a stimulus to reinforce our development trajectory, in the spirit of the Olympic chart."

The presentation also saw the reveal of the bid logo, with was claimed to depict a stylised Milan Cathedral with a façade that turns into a mountain, echoing the Alps and the Dolomites.

The logo’s green, white and red spiers reflect the Italian flag, with the design asserted to show the unity between Milan and Cortina.

Stockholm 2026 also unveiled their logo during their presentation, with a folk design and colours used.

The International Olympic Committee (IOC) member, who chaired the Evaluation Commission for Pyeongchang 2018, asserted the Swedish capital would be the right partner for the organisation.

"As an IOC member I believe our bid represents the best opportunity for the Olympic Movement – not only for 2026, but also for Olympic Winter Games thereafter," she said.

"Our plan is similar to our Swedish values.

"It is sensible, responsible and most importantly, sustainable.

"It will also provide an incredible, true Winter Games experience for the athletes, the NOCs, the International Federations, the National Paralympic Committees and for the entire Olympic Movement.

"Sweden is famous as a beautiful winter wonderland, our passion for sports, and our reliability as partners.

"The Movement needs a partner who can deliver on time, on budget and with no surprises.

"I firmly believe that partner is Stockholm 2026."

The presentation of Stockholm 2026 took place despite uncertainty due to the political situation, with an agreement reached to form a coalition in the city saw parties rule out any taxpayer funding.

The bid has continued with officials claiming they could fulfill their bid promises by using private financing.

While there was no mention of the political situation in the presentation, Stockholm 2026 had claimed they had enjoyed collaborative meetings with politicians prior to visit here this week.

It was claimed the Games would strengthen Sweden’s leadership in sustainability.

The 2026 bid outlines that the Games would be based in Stockholm, but also includes venues in Åre, Falun, and the Latvian town of Sigulda, which would host sliding sports.

The pledge came among uncertainty over the long-term future of the Winter Olympics, with referendums and cost concerns having ended several recent bids from cities.

"Our plan reflects the IOC’s new reality, which is: use what you have, where you have it, and build as little as possible," Brisius told delegates.

"We love this 'new reality' because it’s already how we do business in Sweden; we’re tailor made for it.

"You have a Games concept, a team, and a country you can trust to deliver what the Olympic Movement need right now.

"Stockholm 2026 can provide a showcase for sustainability, existing, new venues, great hosting experience at every level, and, a Winter Games in Sweden, for the first time.

"Leading up to 1912, the Olympic Games were struggling and Sweden stepped forward to host the 1912 Games.

"Stockholm 1912 delivered what was called the Solskensolympiaden, or, 'The Sunshine Games'; not just because of the beautiful weather, but also for the sense of optimism they created for the Olympic Games.

"A lot has changed since 1912, but the one thing that hasn’t changed is the warmth of the Swedish people."

The next milestone for the two remaining candidates is due to come on January 11 when they are expected to submit their bid plans to the IOC, although this deadline could be extended.

The host city is scheduled to be chosen at the IOC Session in Lausanne on June 23 next year.