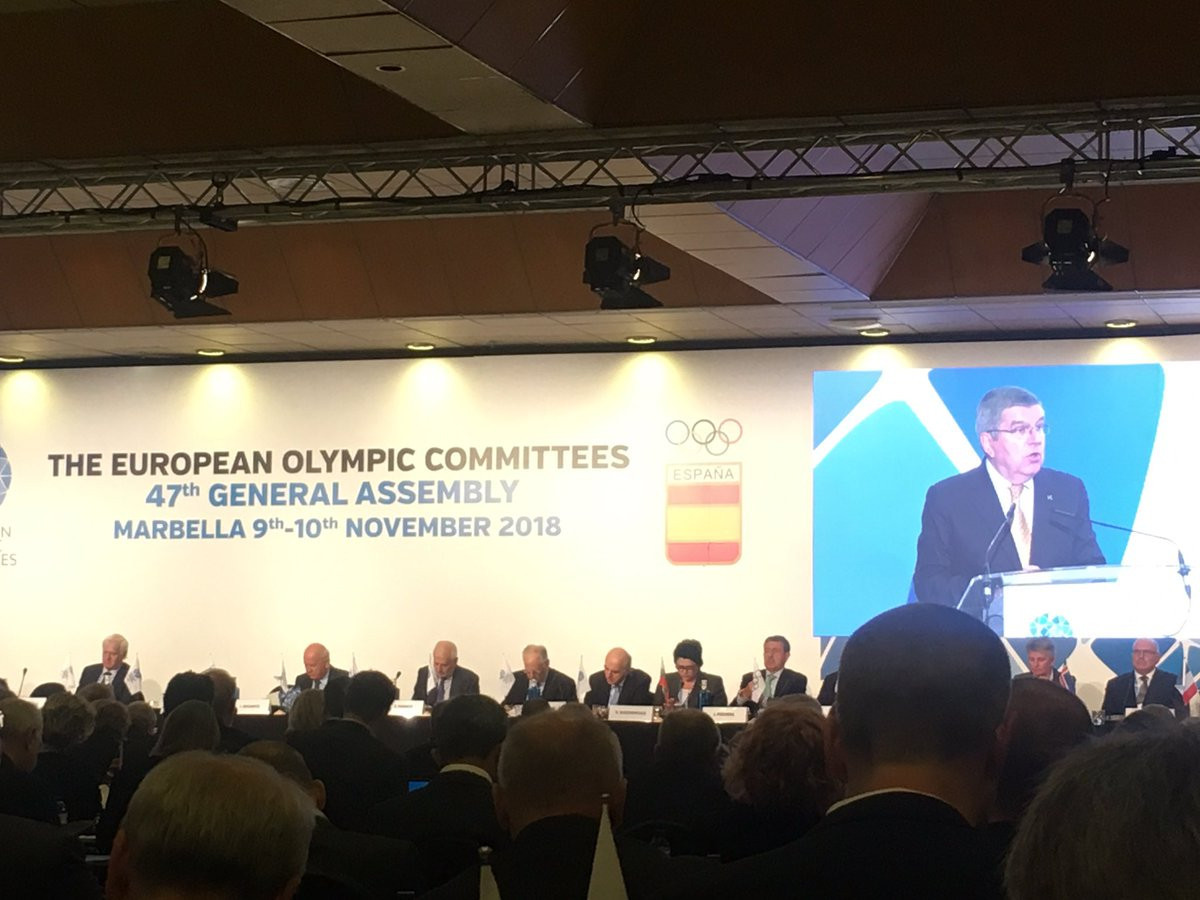 The European Olympic Committees (EOC) Executive Committee meeting here yesterday determined that NOCs were the right bodies to develop sport and that they should "oppose competing models that are primarily based on money and treat athletes as assets".

Bach, in a passionate speech at the EOC General Assembly, claimed their model based on solidarity faced "serious threat" from commercial bodies.

The longstanding system has seen sport controlled by accepted National and International Federations.

Others, however, claim that these bodies are insisting on an unfair monopoly of what should be a freer and more commercially-driven market.

Bach expressed concern that Governments and the European Union (EU) viewed the existing model in the same manner as commercial bodies, with a claimed social role and boost in sport development not recognised.

"Our engagement in sport is based on solidarity, inclusivity and is based on the engagement of millions of volunteers across our continent," he said.

"We have to realise the model is under pressure, for not to say under threat.

"We see a tendency from some Governments, and in particular the European Union, that the value of an organisation and an activity is not determined any more by its values and its contribution to a better society.

"But it is determined by money and markets.

"There we are entering into serious problems for our engagement, because the purely market-based approach ignores the social contribution which sport makes to society all over Europe.

"Sports organisations, based on volunteers and social engagement, are being treated like any commercial sport organisers who wish to pick the cherries of sport.

"They just want to harvest the fruits of the trees you have planted and nurtured over so many years.

"They treat sport like any goods in life and speak of free trade and engagement.

"This is putting many of our sports organisations into trouble.

"There are many more of these examples.

"We have to look into this and start defending our European sports model.

"It is in the interest of European society."

Bach had previously warned about the dangers facing their existing model at last year's EOC General Assembly in Zagreb.

Since that last meeting, a historic decision by the European Commission has deemed an International Skating Union (ISU) rule imposing severe penalties on athletes participating in speed skating competitions unauthorised by the world governing body as a breach of EU anti-trust laws, and must be changed.

The European Commission called for the ISU to change their competition rules as a result of the case.

At the time, the ruling was considered the most significant legal case in European sport since the 1995 ruling in favour of Belgian footballer Jean-Marc Bosman, which secured free movement of players within the EU.

The ruling had been asserted by some sport leaders as threatening to "destroy the Olympic values underpinning sport".

Similar cases have yet to emerge, but there are several ongoing disputes between sporting bodies and so-called commercial enterprises.

The International Basketball Federation have been involved in a feud with EuroLeague over the sport's calendar in what the world body claim is a "commercially-driven attack to the national teams".

Similarly the National Hockey League (NHL) decided not to break its season to allow its players to participate in the men's ice hockey competition at the 2018 Winter Olympics in Pyeongchang, as it had for the previous five editions.

EOC President Janez Kocijančič admitted several of the "commercial events" would continue and that the organisation would have to adapt, but asserted they would need to defend their existing model.

Bach claimed the existing model contributes significantly, stating that the IOC distributes 90 per cent of its income.

He highlighted that the IOC's solidarity programme helps to boost social projects in countries, while supporting the development of sports and athletes.

"You are all contributing," he told delegates.

"The big athletes are also contributing by accepting rule 40 about advertising to allow you and us to protect our sponsors so this model does not only support the big stars, but also all your Olympic team and the not so popular sports.

"If we give up or are forced to give up this model we will land on a purely market based model which means the financing of these smaller sports and younger athletes will become extremely difficult, if not impossible.

"The abandoning of rule 40 would mean the big stars would benefit, but none of the not so big stars or from the smaller sports, as no commercial company will run a campaign on an athlete they do not know yet.

"I would urge you to turn to your Governments, and the EOC turns to the European Union authorities, and make them aware of these issues.

"Make your representatives aware and it will help you to defend this model of solidarity.

"This is really serious."

Rule 40 relates to the Olympic Charter and warns that "no competitor, team official or other team personnel who participates in the Olympic Games may allow his person, name, picture or sports performances to be used for advertising purposes during the Olympic Games".

The rule has come under pressure in recent months, with the German Olympic Sports Confederation Athletes' Commission calling for the IOC to change it to help divert more money to athletes.

They also called on the IOC to "revolutionise" their funding model by granting 25 per cent of revenue directly to athletes and a further 10 per cent to the World Anti-Doping Agency (WADA).

The IOC President also questioned the role of athletes' unions from commercial enterprises, such as the World Players' Association, whose members include the world football players' union FIFPro and the NHL Players' Association from the United States.

The World Players Association, which claims to represent 85,000 players across professional sport through more than 100 player associations in more than 60 countries, criticised the contents of the IOC Athletes' Rights and Responsibilities Declaration last month.

The organisation, based in Switzerland with a focus on labour laws, claimed the document "did not come close to respecting the internationally recognised human rights of athletes".

"It is instead considered athletes' unions, this means sport is considered a commercial activity and that athletes are considered employees of NOCs and National Federations, this is not the case.

"A number of events in Europe in particular, when it comes to hearings about sports issues, they invite these athletes' unions.

"They have their right to existence, yes, as they represent athletes in professional leagues.

"An athlete playing with Ronaldo in Serie A cannot be compared or have the same issues as an athlete in rowing or a young wrestler.

"If you are talking about labour contracts or if you look outside Europe in some cases, these unions are not ready to accept priorities of the WADA Code.

"You cannot compare them on the same level as democratically elected athletes who have rights in your Executive Boards and National Federations who can speak because of their election and are not just self-appointed athletes and speakers who can only pretend to speak for others and represent others."