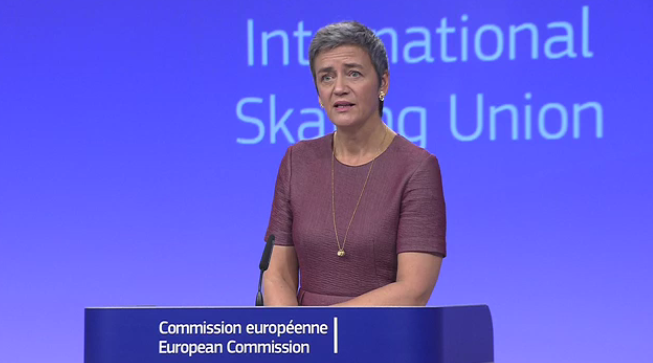 An International Skating Union (ISU) rule imposing severe penalties on athletes participating in speed skating competitions unauthorised by the world governing body has been ruled as a breach of European Union anti-trust laws and must be changed.

The ruling is considered the most significant legal case in European sport since the 1995 ruling in favour of Belgian footballer Jean-Marc Bosman which secured free movement of players within the EU.

Other sporting bodies are now likely to come under similar pressure to change their competition rules in which sporting leaders claim could “destroy the Olympic values underpinning sport”.

The European Commission, however, claim that ISU rules which had permitted sanctions, including lifetime bans, for those participating in unlicensed events were unfairly persecuting athletes and preventing the innovation and growth of the sport.

"International sports federations play an important role in athletes' careers - they protect their health and safety and the integrity of competitions," said European Commissioner Margrethe Vestager, who is responsible for ruling on competition policy, when announcing the verdict today.

"However, the severe penalties the ISU imposes on skaters also serve to protect its own commercial interests and prevent others from setting up their own events.

"The ISU now has to comply with our decision, modify its rules, and open up new opportunities for athletes and competing organisers, to the benefit of all ice skating fans."

The ISU have said that they "disagree" with the decision and will "review it carefully" while reserving its "right to file an appeal before the European Courts".

The Commission was ruling after an appeal was made against the ISU by Dutch speed skaters Mark Tuitert, who won the 1500m at the 2010 Winter Games in Vancouver, and Nels Kersholt.

The ISU now have 90 days to "stop its illegal conduct" and change its rules.

"In order to comply, the ISU can abolish or modify its eligibility rules so that they are based only on legitimate objectives (explicitly excluding the ISU's own economic interests) and that they are inherent and proportionate to achieve those objectives," the European Commission added today.

"In particular, the ISU should not impose or threaten to impose unjustified penalties on athletes who participate in competitions that pose no risk to legitimate sports objectives. If the ISU maintains its rules for the authorisation of third party events, they have to be based on objective, transparent and non-discriminatory criteria and not be intended simply to exclude competing independent event organisers.

"While the Commission did not consider it necessary or appropriate to impose a fine in this case, if the ISU fails to comply with the Commission's decision, it would be liable for non-compliance payments of up to five per cent of its average daily worldwide turnover."

Today's decision was fiercely opposed beforehand by the International Olympic Committee (IOC), who wish for all sporting legal cases to be considered by the Court of Arbitration for Sport rather than non-sporting arbitrators such as the European Commission.

IOC President Thomas Bach, told the European Council of Sports Ministers in Brussels last month: "We are deeply concerned about certain interpretations of the European treaty and EU competition law with regard to sports."

The IOC urged sports officials to step-up their effort to lobby politicians to protest the "European sporting structure" at last month's EOC General Assembly in Zagreb.

They expressed their "sincere hope that we do not lose sight of the important social role of sport by equating it with commercial sports business".

"If everything in Europe is looked at only from a business perspective, the social value of sport is lost - sport is about so much more than business," Bach said.

But the European Commission accused the ISU of "pursuing its own commercial interests to the detriment of athletes and organisers of competing events".

It also claimed they were limiting opportunities for athletes and preventing sporting innovation.

"Under the ISU eligibility rules, in place since 1998, speed skaters participating in competitions that are not approved by the ISU face severe penalties up to a lifetime ban from all major international speed skating events," they said.

"The ISU can impose these penalties at its own discretion, even if the independent competitions pose no risk to legitimate sports objectives, such as the protection of the integrity and proper conduct of sport, or the health and safety of athletes.

"By imposing such restrictions, the ISU eligibility rules restrict competition and enable the ISU to pursue its own commercial interests to the detriment of athletes and organisers of competing events.

"In particular, the Commission considers that the ISU eligibility rules restrict the commercial freedom of athletes who are prevented from participating in independent skating events.

"As a result of the ISU eligibility rules, athletes are not allowed to offer their services to organisers of competing skating events and may be deprived of additional sources of income during their relatively short speed skating careers.

"The ISU eligibility rules prevent independent organisers from putting together their own speed skating competitions because they are unable to attract top athletes.

"This has limited the development of alternative and innovative speed skating competitions, and deprived ice-skating fans from following other events."

The ISU have claimed that they have never enforced a lifetime ban as a punishment and that their current system permits an "adequate balance between the commercial interests of independent organisers and fundamental sporting values".

They also insisted that a major problem with these rival events is integrity, such as one unauthorised tournament in Dubai, which supposedly had "close links to betting in Asia".

"The ISU disagrees with the European Commission’s decision that the ISU’s eligibility rules breach EU competition law," they said.

"The decision fails to consider the specific nature of sport by putting commercial interests ahead of the principles of integrity, health and safety that protect fair play in sport.

"This contravenes the Treaty which recognises the voluntary, social and educational functions of sport.

"The decision harms not only the ISU but also Skaters and the entire skating community."

The IOC added today: "This is a decision related to a very specific rule in one International Federation.

"The commissioner expressively acknowledged that: 'International sports federations play an important role in athletes' careers - they protect their health and safety and the integrity of competitions.'"