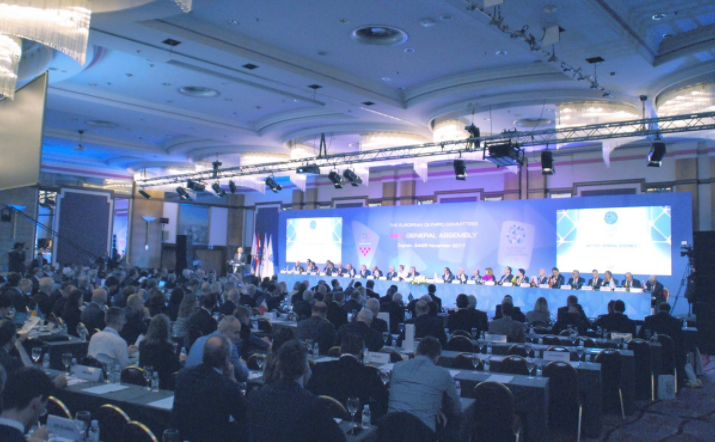 Officials are stepping-up a campaign to protect the future of the existing "European sports model" as expectations grow that the European Union (EU) could soon deliver a landmark ruling granting more power to "rival" leagues and bodies.

The European Commission is expected to deliver a verdict within the next two weeks in a case challenging an International Skating Union (ISU) rule that skaters can receive sanctions, culminating in lifetime bans, if they compete in events unauthorised by the governing body.

This could potentially set a milestone precedent on a similar scale to the 1995 ruling involving Belgian footballer Jean-Marc Bosman, which paved the way for the free movement of players in the EU.

It comes at the same time as a dispute between the International Basketball Federation (FIBA) and EuroLeague over the releasing of players by clubs so they can compete for their countries.

Many similar cases and disputes exist across other sports in what the International Olympic Committee (IOC) and others believe is a growing danger to the longstanding system of control being in the hands of accepted National and International Federations.

Others, however, claim that these bodies are insisting on an unfair monopoly of what should be a freer and more commercially-driven market.

IOC President Thomas Bach met with the European Council of Sports Ministers in Brussels last week in an attempt to apply political pressure and they are urging National Olympic Committee representatives to be similarly active.

The IOC said after the meeting that Bach expressed his "sincere hope that we do not lose sight of the important social role of sport by equating it with commercial sports business".

"We are deeply concerned about certain interpretations of the European treaty and EU competition law with regard to sports," the German said.

"If everything in Europe is looked at only from a business perspective, the social value of sport is lost - sport is about so much more than business."

The basketball situation arose when the EuroLeague - run by EuroLeague Commercial Assets - announced a competition calendar for this season that would not feature dedicated windows for international games in November 2017 and February 2018.

An alternative proposal for a single six-week window for national team competitions in June and July was dismissed as a "heavy-handed diversionary tactic" by FIBA.

A total of 31 members of the European Parliament have signed a letter to the EU President Jean-Claude-Juncker and the EU Commissioners for Competition and for Culture, Youth and Sport calling for an intervention to ensure players are released to compete for their countries.

They called for an "urgent" solution and accused Euroleague Commercial Assets of taking a "monopolistic approach".

Another example of a club versus country row came earlier this year in ice hockey when the National Hockey League decided not to break its season to allow its players to participate in next year's  Winter Olympics in Pyeongchang as it had for the previous five editions.

Kontinental Hockey League President Dmitry Chernyshenko has also threatened not closing that event during the Olympics, pending the outcome of ongoing IOC into alleged Russian doping.

A 2016 European Commission charge sheet described ISU penalties as anti-competitive because they restricted the commercial freedom of athletes and prevented new entrant organisers from emerging.

It was reported by Reuters last week that they are likely to rule against the ISU - an outcome which sporting officials also accept as likely.

The sports world would also prefer for all debates to take place internally - or through forums such as the Court of Arbitration for Sport - rather than progressing to EU level.

"We ask all of you to be in touch with your Sports Minister and touch base on this point - it is really important," IOC deputy secretary general Pere Miró said during the European Olympic Committees (EOC) General Assembly which closed here yesterday.

"The European Sports model is really under threat today.

"This is especially the EOC’s responsibility to take over this because it is a European issue.

"You can count on the IOC’s support on this."

"We have had a big intrusion of commercialism in sport," he told delegates.

"Top athletes from different sports are nearly owned by commercial leagues are not allowed to come to Olympic Games and the European Championships.

"We must defend European model of sport, where there is a stream-up and stream-down and where everything, from early beginnings to end of sport, will belong to the entire sports family."

Kocijančič did, however, then differ from Miró in calling on the IOC to take the leading campaigning role.

"Here, I wish we would have a much more determined role from IOC," the Slovenian said.

"A problem we face nowadays is that nearly everybody wants to decide on sports problems: including courts, the EU and private owners.

"We should have a coherent structure with the IOC at the top."