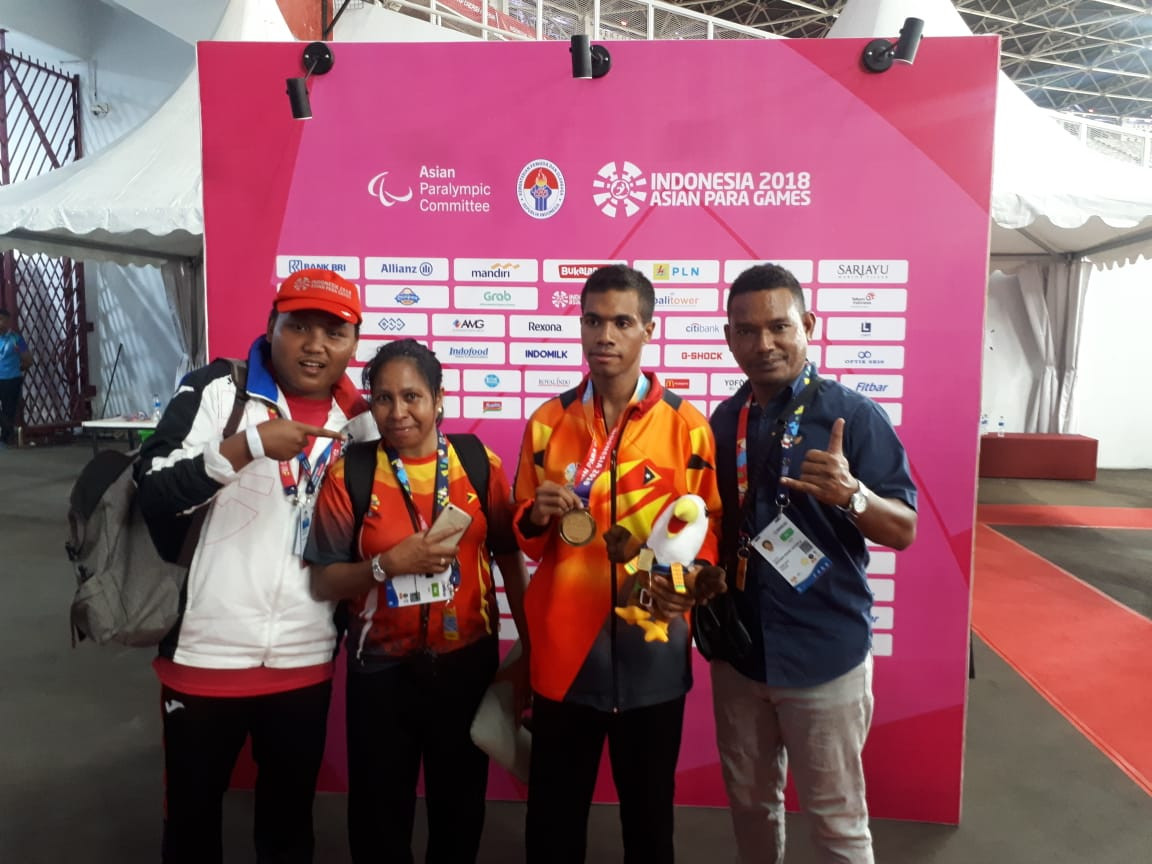 The small country of Timor-Leste have won their first gold medal from any major multi-sport event by claiming victory today in the men's T37 400 metres at the Asian Para Games in Jakarta.

That all changed when Freitas Teofilo won the top prize in his event, crossing the line in the Gelora Bung Karno Main Stadium in 53.14sec.

The silver and bronze both went to Iran, through Rastegari Mobin Hashem and Ghasemi Davoudali.

"I am really happy to win a medal at the Asian Para Games because we are participating in the event for the first time," Teofilo said.

Elsewhere in the day's action, South Korea continued to perform well in the judo, with Park Hayeong claiming gold in the men's over 70 kilogram class, although the prize came in controversial fashion.

Hayeong was awarded the gold when China's Wang Hongyu was disqualified for inappropriate behaviour.

"The action of the Chinese athlete that blocked the South Korean athlete's movement with his knee is not in line with the spirit of judo, thus [he was] disqualified," Martuaraja Simatupang, deputy manager of the judo competition, said.

As a result no silver medal was awarded at the medals ceremony and the Chinese flag was not raised.

His score of 251.4 saw him finish ahead of Thailand's Anuson Chaichamnan and another South Korean, Jeon Young-jun.

Hosts Indonesia had a successful day, especially in the table tennis where they surpassed their medal target of two golds.

David Jacobs won the first in the TT10 men's singles event, before all of today's medals came in the doubles.

Jacobs picked up his and the team’s second in the TT10 doubles alongside Komet Akbar, before Mohammad Rian Prahasta and Suwarti won the class 6-8 mixed doubles and Agus Sutanto and Tatok Hardiyanto won the men's TT 4-5 event.

In the badminton the hosts' top seeded women's doubles pairing of Leani Ratri Oktila and Khalimatus Sadiya made it through to the quarter-finals after beating Japan's Noriko Ito and Akiko Sugino 21-9, 21-10.

With the day’s action over, China remain top of the medals table with 105 golds and 197 medals overall, while South Korea sit second with 38 golds and Iran third with 30.