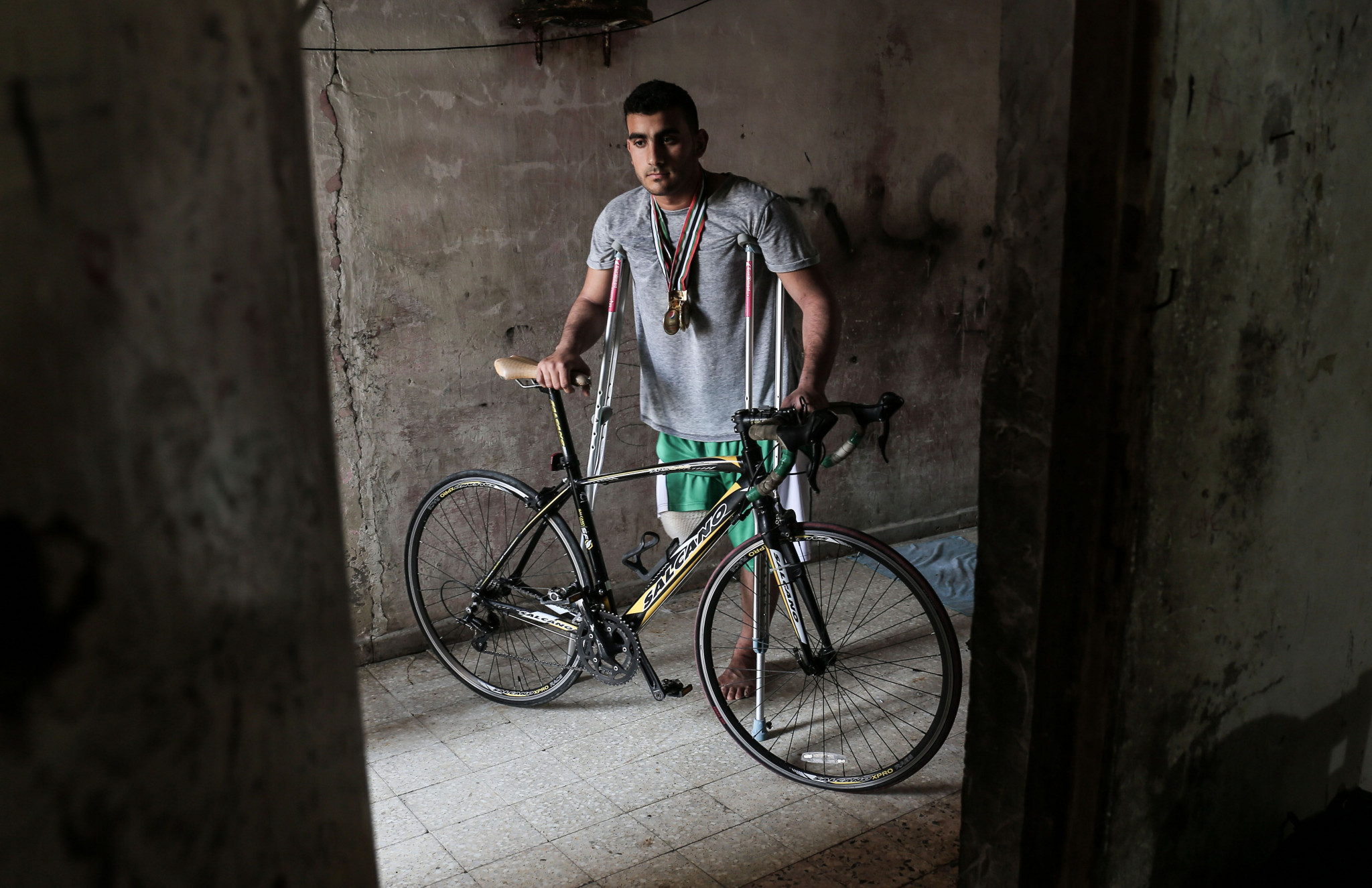 Palestinian cyclist Alaa Al Daly, who lost a leg in April after being shot by Israeli forces at the Gaza border, missed his chance to compete in the individual time trial at the Asian Para Games after failing to get the necessary permit to travel to the event.

The 21-year-old, who was hoping to compete in the able-bodied Asian Games before he was shot, was contacted by the Asian Paralympic Committee (APC) who arranged for him to compete at their event in Jakarta instead.

The APC secured Al Daly entry to the Games, while his coach arranged the necessary racing permits from the International Cycling Union, but he still missed the race after failing to secure the necessary permit to travel to the Indonesian capital.

"It is frustrating that despite our best efforts, including changing his flight four times, we haven't managed to bring Alaa Al Daly out here to compete and let him experience the world of Para-sport," APC President Majid Rashed said.

"We will continue to work with the National Paralympic Committee of Palestine to ensure he has opportunities in the future."

Al Daly lost his leg when he was shot while protesting on the Gaza-Israel border to mark the Great March of Return, a traditional event during which Palestinian refugees demand to be allowed to return to land in what is now Israel.

He was originally hoping to qualify for the able-bodied Asian Games in Jakarta and Palembang in August.

With Al Daly not there China picked up three golds, Japan one and South Korea two across the six classes for the men's time trial,

In today's action, there was also a world record in the powerlifting.

China's Tan Yujiao broke her own record in the women's 67 kilogram class to take gold with a lift of 140kg.

In doing so she beat her previous best of 139kg, which she set at the Asia-Oceania Open Championships in Kitakyushu in Japan last September.

Silver and bronze were taken by Kazakhstan's Raushan Koishibayeva and Kim Hyeong-hui from South Korea respectively.

South Korea, meanwhile, picked up another gold in the judo, with Jin Song-lee winning all her bouts in the women's 63kg class.

China, meanwhile, who usually dominate the 63kg class, picked up their first judo medal of the competition in the women's 57kg category.

Lin Zhilian won it as she beat Uzbekistan's Nafisa Sheripboeva at the JIExpo in Jakarta.

While China no longer dominate the judo, they continued to show their class in the wheelchair fencing, picking up their fifth gold of the competition today.

Their team of Zou Xufeng, Gu Haiyan, Wang Xiujan and Xiao Rung beat Thailand 45-25 in the final of the women's sabre event.

As the only other country in the event, hosts Indonesia took bronze.

Perhaps the most controversial moment of the day came when Iran beat Iraq in the men's goalball competition.

The Iraqi team led 6-5 at half time in the Pool B match, but eventually fell to a 14-9 defeat.

Afterwards the Iraqi players were seen in tears, while their coach Yosefian Mahmod blamed the referee for their loss.

"We're disappointed because the referee's decision disadvantaged us," he said.

After three full days of competition China top the medals table with 143 in all, 78 of them gold.

South Korea in second have 57 overall including 24 golds.