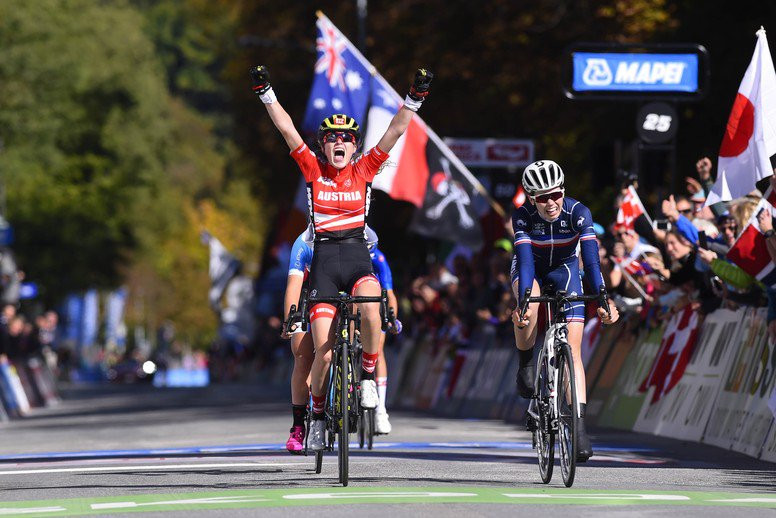 Home rider Laura Stigger delighted the crowds in her home city of Innsbruck as she won her second cycling world gold in the space of a month today, adding the women's junior road race title to the junior cross-country mountain bike crown she claimed in Lenzerheide, Switzerland.

On the fifth day of racing at the International Cycling Union (UCI) Road World Championships in Austria, Stigger prevailed in a thrilling sprint for the line involving four riders after attacking with 100 metres to go and crossing the line first in 1 hour 56min 26sec.

France's Marie Le Net, who had joined the leading trio in the final two kilometres of the 70.8km race at the end of two long climbs, finished with silver ahead of Simone Boilard, who thus won Canada's first medal of the Championships as she edged ahead of Barbara Malcotti of Italy.

All four were given the same time.

"It's incredible to win in my home town," said Stigger.

"Thanks to the people for standing on the course and cheering me on.

"It was a very tight victory - my legs were burning in the sprint.

"This morning I didn't believe I had any chance of winning because it's only my second road race.

"I just wanted to have fun and now I'm the world champion - it's unbelievable."

It was Canada's first medal in the junior women's category at these Championships since Clare Hall-Patch won bronze in 2000 - the year Boileau was born.

"Stigger's attack was really decisive and I saw the Italian following her and I thought, 'this is it, I have to push,'" Boileau said.

"I was cramping but I gave everything I had to win this medal."

Belgium's Remco Evenepoel also celebrated a double world triumph as he followed up his men's junior time trial win in Innsbruck by claiming a second gold in the men's junior road race despite losing two minutes after crashing early in the race.

Evenepoel finished the 131.8km course in 3:03.49, with Marius Mayrhofer of Germany taking silver 1:25 behind and bronze going to Italy's Alessandro Fancellu who was 1.38 adrift.

"I crashed at a bad moment before the Gnadenwald climb and I was almost two minutes behind, but I came back and I had an amazing descent.

"I knew I could drop the German guy because he couldn't ride with me.

"I already knew what I would do when I'd win.

"I wanted to finish the season the same way I started at Kuurne-Brussels-Kuurne, with lifting my bike, so I did it.

"I came here to win two titles - what a season."