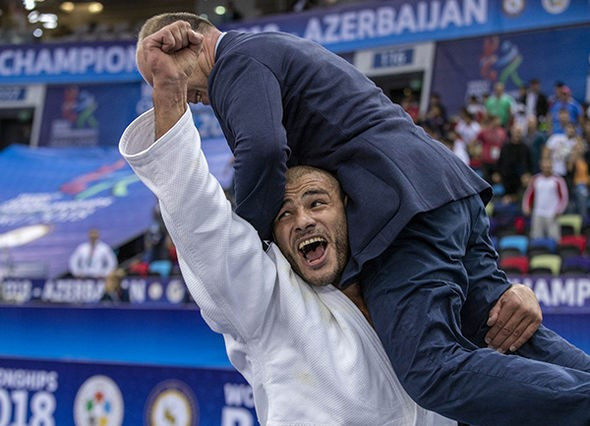 Georgia won their first gold medal of the International Judo Federation World Championships here in Baku today as Gahum Tushishvili concreted his world number one status by taking his first world title at over-100 kilograms.

Ten-time world champion Teddy Riner of France did not compete so the Georgian's win was the first time the heavyweight title has changed hands since 2007.

Tushishvili faced former team-mate Ushangi Kokauri in the final, who he defeated with six seconds left on the clock with a seoi-nage for ippon.

Kokauri was born in Georgia but now competes for hosts Azerbaijan and the world number 36 also won his first World Championship medal, taking home silver in front of his country's President Ilham Aliyev.

The bronzes went to Japan and Mongolia.

Oltiboev qualified for the semi-finals in front of the Japanese judoka but lost both of his last two matches, firstly to Kokauri and secondly to Harasawa as he missed out on a medal.

Mongolia's world junior champion Duurenbayar Ulziibayar could not claim the senior title but fought off the challenge of under-100kg world and Olympic champion, Lukas Krpalek.

The Czech judoka has moved up to the heavyweight category and is ranked at third in the world, but lost by ippon to Ulziibayar in his bronze medal match.

Members of the Czech Republic team in the crowd protested the refereeing decision but it made no difference as the Mongolian was awarded the prize.

In the women's over-78kg event, Japan claimed their seventh gold in as many days.

Openweight world champion ASAHINA Sarah (JPN) throws CERIC (BIH) for ippon and will be in the +78kg heavyweight final!#JudoWorlds2018 pic.twitter.com/aI9etFyTSK

The Japanese judoka is ranked third in the world but had to challenge the former two-time world champion and three-time Olympic medallist for the title.

Despite her experience, Ortiz conceded three shidos to be eliminated and hand the gold medal to Asahina.

In the bronze medal contests, Bosnia and Herzegovina won their first medal.

With the world number one Kim Min-Jeong of South Korea out in the second round, Larisa Ceric was the highest ranked athlete left in the competition as world number two.

Ceric lost her semi-final to Asahina but recovered to beat Britain's Sarah Adlington and take home the first medal for her country in Baku.

Adlington finished joint fifth, the best result of her career so far.

Her win also put Turkey above Brazil in the overall medal table.

Tomorrow, the Championships conclude with the mixed team event, which is due to make its Olympic debut at Tokyo 2020.

A unified Korean team will be one of 19 countries expected to compete.