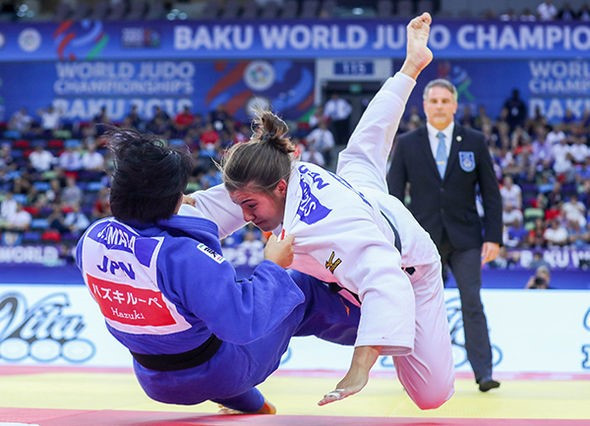 Shori Hamada was the one to take Japan’s gold medal tally to six as she became world champion in the women’s under-78 kilograms division.

Brazilian Mayra Aguiar was the defending champion but was eliminated in the third round.

Hamada beat world number one Guusje Steenhuis of the Netherlands in the final to win gold at her first World Championships.

The bout was taken to golden score as nothing separated the two judoka in normal time.

After five minutes of extra time, Steenhuis conceded a third and fatal shido which eliminated her from the contest.

Russia’s Aleksandra Babintseva claimed one of the two bronze medals on offer.

Joining her on the third step of the podium was the second Dutch judoka in the top four, former champion Marhinde Verkerk.

Both athletes have been used to silver medals.

Liparteliani is an Olympic and world silver medallist, while Cho came second at this year’s Asian Games.

Cho managed to claim the gold after another marathon final with four minutes and 58 seconds of golden score needed to separate the two.

Tomorrow is the last day of individual competition as the heavyweight divisions are decided.

The women’s over 78kg and men’s over 100kg events will form the penultimate day of the Championhips, with the team event taking place on Thursday (September 27).