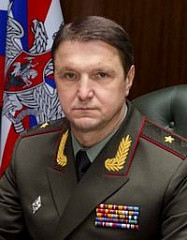 Russia has appointed Igor Sidorkevich as Deputy Sports Minister and placed him charge of the country's National Anti-Doping Plan.

The 55-year-old previously headed the Russian Military Police and is a two-time sambo world champion.

His doping role will be seen as key with Russia desperate to restore their reputation following the systematic manipulation of the drug testing system at their home Sochi 2014 Winter Olympics and Paralympics.

The country were ordered to compete under a neutral flag at the Pyeongchang 2018 Winter Olympics in February and they remain banned by both the International Paralympic Committee and the International Association of Athletics Federations.

These are acceptance of the findings of the McLaren Report - which outlined much of the evidence against Russia - and full access to the Moscow Laboratory.

"The competence of Igor Sidorkevich will include the implementation of a set of measures to implement the National Anti-Doping Plan in Russian sport," a statement on Russia's Sports Ministry website said.

Sidorkevich is set to work under Sports Minister Pavel Kolobkov.

"Igor Sidorkevich is charged with a very responsible direction of the department's work," Kolobkov said.

"He knows the industry well.

"I am confident that with his arrival we will strengthen our team and overcome the challenges facing Russian sport."

Sidorkevich's remit will also include education, scientific research and training up professionals.

He has served various roles in the military and was also vice president of the Judo Federation of Russia.

On the sambo mats he has a European gold medal to go alongside his two world titles.