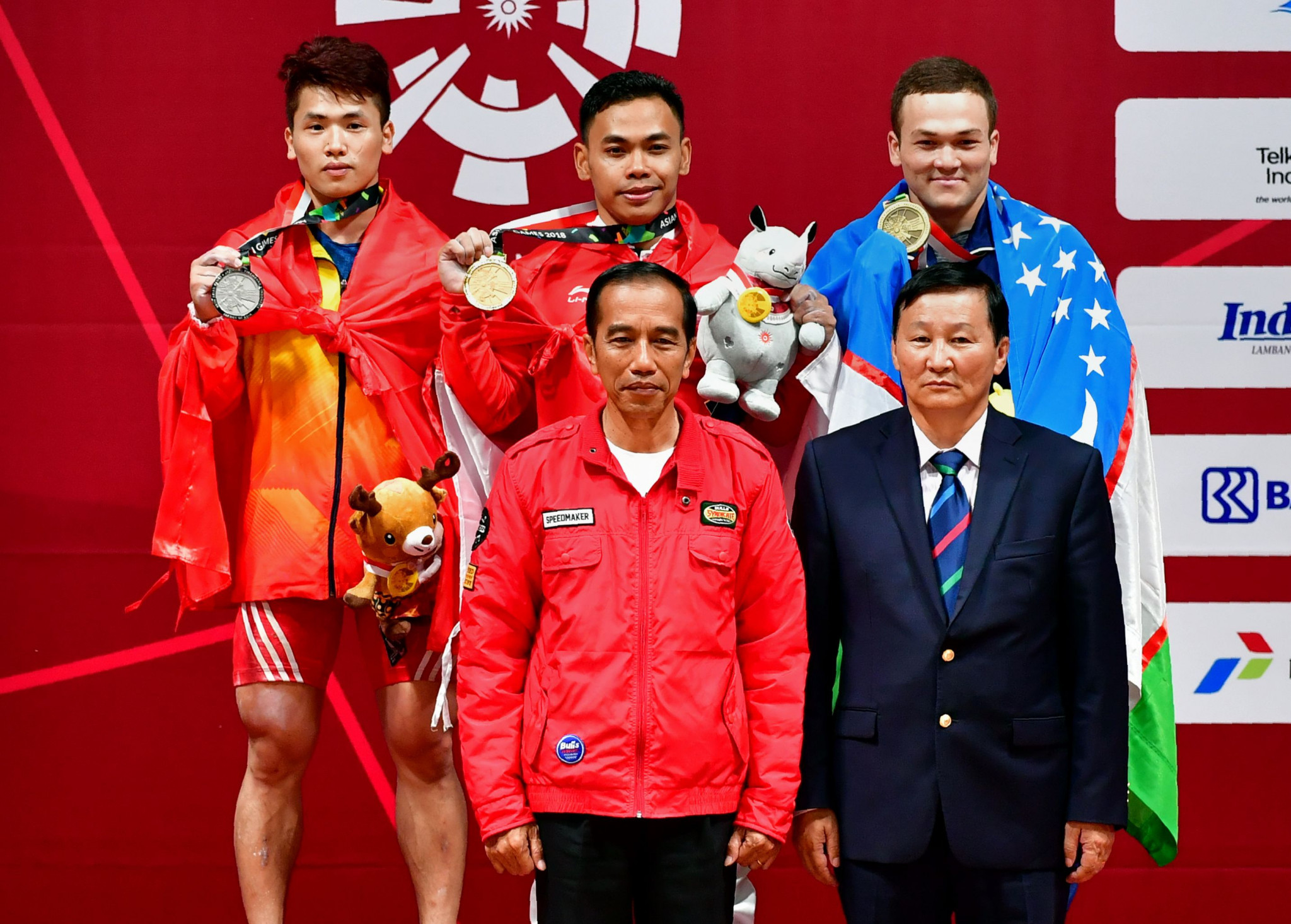 Irawan secured the host nation's first weightlifting gold medal of the Games with a total of 311kg, made up of 141kg in the snatch and 170kg in the clean and jerk, in Hall A of the Jakarta International Expo.

Vietnam's Trinh van Vinh required a personal best clean and jerk of 179kg with the final lift of the competition to take the gold medal away from the Indonesian, but his attempt was unsuccessful and he had to settle for silver with a total of 299kg.

Widodo presented the gold medal to Irawan, who saluted the President throughout his county's national anthem.

Victory comes after he had finished in the bronze-medal position at the Guangzhou 2010 and Incheon 2014 Asian Games.

"I'm a proud Indonesian and pleased for the country to win gold," Irawan, a three-time Olympic medallist, told AFP.

"I feel like everything I have fought for I have now finally achieved."

Uzbekistan's Adkhamjon Ergashev rounded out the podium with 298kg, while North Korea's Sin Chol Bom narrowly missed out on a medal in fourth place.

Today’s other weightlifting event came in the women's 53kg category and saw Hidilyn Diaz win the Philippines' first gold medal of these Games.

Diaz triumphed with a total of 207kg after managing 92kg in the snatch and 115kg in the clean and jerk.

China were again the dominant force overall today with two of their gold medals coming in the mountain bike cycling cross-country events.

He posted a time of 1 hour 34min 58sec to prevail by more than a minute over fellow Chinese Lyu Xianjing.

In the women's event, Yao Bianwa led a Chinese one-two finish ahead of Li Hongfeng.

There was also success for China today in the women's artistic gymnastics individual all-around event as Chen Yile took the gold medal with 55.950 points.

In wushu, China came out on top in two of the three events with Wu Zhaohua winning the men's daoshu and gunshu all-around and Guo Mengjiao taking victory in the women's jianshu and qiangshu all-around.

The other gold medal-winning nation was Macau after Junhua Huang claimed the men's nanquan and nangun all-around title.

It secured the country only their second Asian Games gold medal across all sports, after Jia Rui won the men's daoshu and gunshu all-around event at Guangzhou 2010.

At 16 years and 101 days, he is the youngest gold medallist in shooting at the Asian Games since Thailand's Thanyalak Chotphibunsin won gold in the women's team event at Doha 2006, aged 16 years and 14 days.

There were also shooting wins today for China’s Hui Zicheng in the men's 50m rifle three positions and Lebanon in the inaugural trap mixed team event.

It is also the fourth medal for Lebanon in 2018, a new record total for the country at a single Asian Games.

Elsewhere in taekwondo, there were victories for China's Luo Zongshi in the women's under-57kg category and Iran's Saeid Rajabi in the men's over-80kg division.

Luo won China's first gold in taekwondo at these Asian Games with a 6-5 win over South Korea's Lee Ahreum, the defending champion.

Rajabi, meanwhile, triumphed thanks to a narrow 3-2 win over Uzbekistan's Dmitriy Shokin.

The men’s Greco-Roman finals were won by Japan’s Shinobu Ota and South Korea’s Ryu Hansu with the former beating Kyrgyzstan’s Kanybek Zholchubekov 8-3 at 60kg and the latter defeating Kazakhstan’s Almat Kebispayev 5-4 at 67kg.

After the third day of competition, China lead the overall medal table with 30 golds, 18 silvers and 12 bronzes.

Japan are second with 12 golds, 17 silvers and 18 bronzes, while South Korea are third with eight golds, 12 silvers and 14 bronzes.