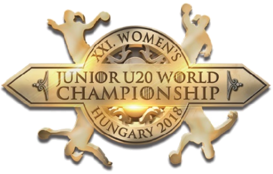 Hungary defeated South Korea in the semi-finals to book a home final with Norway at the Women's Junior World Handball Championship in Debrecen.

The home crowd went home happy thanks to a 30-25 victory at the Fonix Hall.

Noemi Hafra top-scored for the Hungarians with seven as the host nation defeated the country which won the tournament in 2014.

More than 5,000 fans packed in to cheer their team home.

"Before the game we saw in the social media and in the TV that there are many and all tickets are sold," said Hafra.

"I was counting on it and I was very happy with it, and it motivated the team.

"One day before the finals, we are very tired, it's more in the brain that we need to refresh, so we're going to relax so that tomorrow we can play with a lot of energy."

Henny Ella Reistad top-scored for the Norwegians with seven goals as her side pulled away in the second half of the match, having led 14-12 at halfway.

Russia, when including the Soviet Union, have won this title 11 times but not since 2005 and they will miss out again.

The final and bronze medal match will be held tomorrow.

Other classification games will also be held.