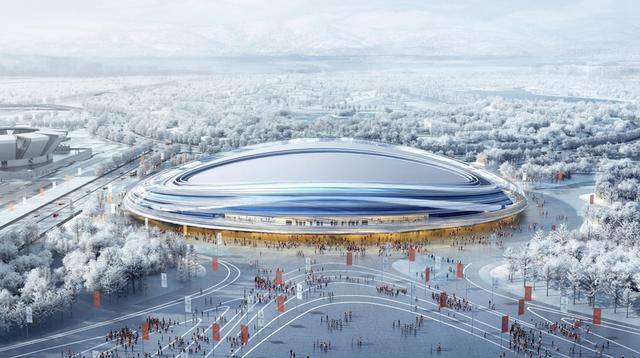 Dubbed the "Ice Ribbon" due to 22 "ribbons" being made through 3,360 pieces of glass, it is claimed to depict speed skaters racing.

The venue will have a capacity of 12,000 when it is completed, with the current schedule estimating work will have concluded by the end of 2019.

It is located a short distance to the north of the Olympic Park, which boasts Beijing 2008 venues such as the Water Cube aquatics centre and the Bird's Nest Stadium.

Espeli claimed he was pleased by the progress being made at the site and the location of the future venue.

"I'm sure the athletes will be very fascinated and very happy to be welcomed by such a venue in 2022," Espeli said, according to the China Daily.

"It is a dream come true for speed skating to come to a really great audience, considering Beijing is one of the biggest cities in the world and the oval is in one of the most well-known areas of the city.

"We are facing a very fortunate situation, with this venue being available two years before the Games, giving the best opportunity to create optimal conditions.

"It's very encouraging to see coexistence between speed skating and other ice sports and public use in the oval's post-Games utilisation plan."

During their meeting with organisers, the ISU discussed competition schedules, ice making facilities and legacy plans.

The oval will be open to the public following the Olympic and Paralympic Games.

The venue has the capability of hosting long and short track speed skating, along with figure skating, ice hockey and curling.

The Winter Olympics are set to take place from February 4 to 20 in 2022, with the Paralympics following from March 9 to 18.