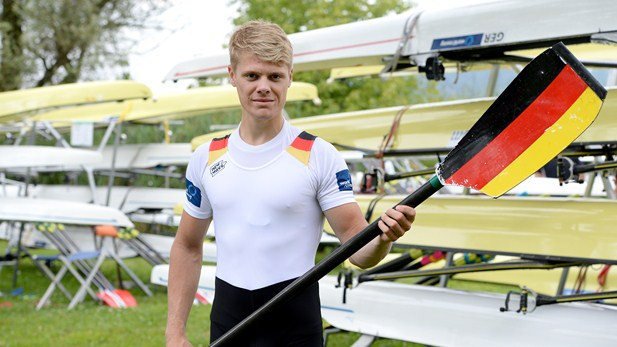 Germany’s Jason Osborne led the field by a considerable distance to ensure he won the men’s single sculls title at the World Rowing Cup in the Serbian capital Belgrade.

Osborne recorded a time of 6min 58.430sec to emerge triumphant in the competition, just under eight seconds ahead of Switzerland's Michael Schmid, who claimed silver in a time of 7:06.170.

Osborne's compatriot Jonathan Rommelmann rounded off the podium thanks to a time of 7:06.480.

Alena Furman ensured Belarus took the title in the women's lightweight event with a time of 7:46.150.

This was just about enough to beat Canada's Ellen Gleadow, who finished second in 7:47.940, and Germany's Ladina Meier, who secured bronze in 7:48.950.

The lightweight men's quadruple sculls title was won by the Czech Republic after Jiri Kopac, Milan Viktora, Jan Vetesnik and Jan Cincibuch, who put in a time of 6:06.07.

No bronze medal was awarded.

In the Paralympic events, Ukraine’s Roman Polianskyi secured a comfortable victory in the men's single sculls with a time of 10:12.040, just under 20 seconds ahead of Great Britain's Andrew Houghton, who crossed the line in a time of 10:30.770.

The Ukrainians did, however, have to settle for silver in the two other Paralympic events.

Norway's Birgit Skarstein beat Anna Sheremet to gold in the women's single sculls with a time of 11:17.320, just over two minutes ahead of Sheremet on 13:32.430 whilst the Netherlands beat Ukraine to gold in the mixed double sculls final thanks to a time of 2:05.09 posted by Annika van der Meer and Corne de Koning.

The Ukrainian duo of Svitlana Bohuslavska and Iaroslav Koiuda were second in 2:11.63.

No bronze medal was awarded.