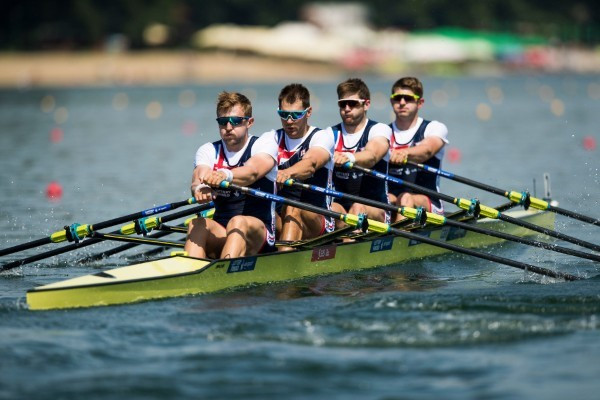 Great Britain were among the heat winners in the men’s quadruple sculls to qualify directly for the final on the opening day of the World Rowing Cup in Belgrade.

The quartet of Thomas Barras, Jonathan Walton, Graeme Thomas and John Collins won heat one with a time of 5 min 53.570sec in the Serbian capital.

They are looking to better their silver medal from the 2017 World Championships in Sarasota in Florida.

They qualified directly to the final along with The Netherlands’ Olivia van Rooijen, Karolien Florijn, Sophie Souwer and Nicole Beukers, the winners of heat two in 6:34.47.

In the men’s single sculls, world champion Ondrej Synek won heat two after the Czech posted a time of 07:09.250.

The boat class began with 34 boats divided into six heats and the goal was to be in the top four to get a direct path to the quarter-finals.

Serbia’s Aleksandar Filipovic qualified second in 7:09.91, while Britain’s Harry Leask advanced with a third-place finish in 7:12.220.

The final qualifier was Bulgaria’s Boris Yotov in 7:13.14.

Belarus’ Stanislau Shcharbachenia, qualified from heat five in fourth place with a time of 7:24.110.

She went straight through to the semi-finals along with the United States’ Kara Kohler, the runner-up in 7:50.87.

Austria’s Magdalena Lobnig and Britain’s Victoria Thornley are expected to challenge Gmelin and both took top spot in their heats.

More than 500 rowers are competing at the opening event of the World Rowing Cup season, with 42 nations taking part.

A total of 14 World Cup categories are being contested, along with a further six international events.