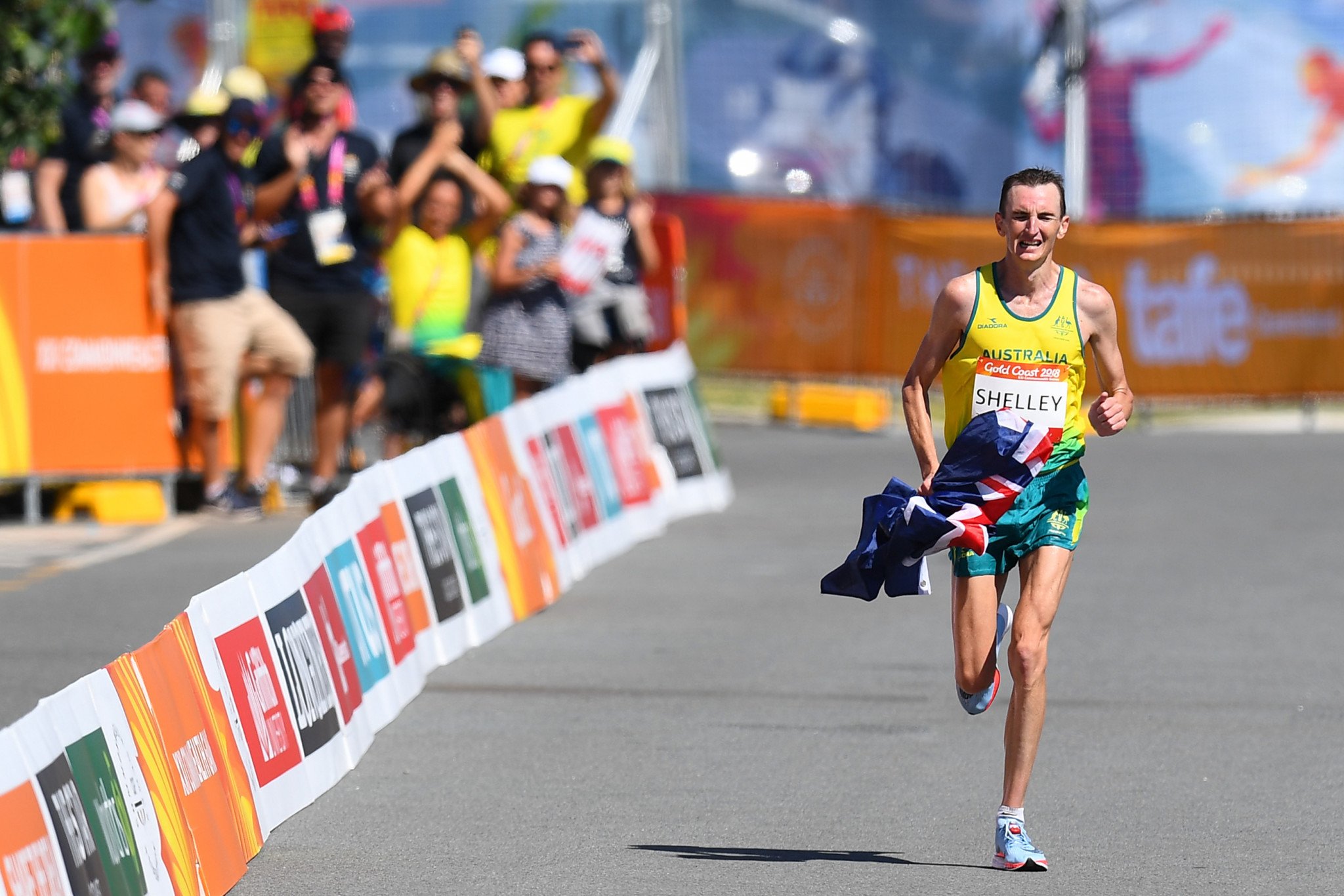 Hawkins had looked on course to claim an impressive victory after pulling clear of the field and stretching clear of Glasgow 2014 winner Shelley in blistering heat, despite the early start time.

The Scottish runner had opened up an advantage of over two minutes, with around two miles left of racing on the 26.2 mile course.

The heat, however, took its toll on the 25-year-old, who staggered and then collapsed to the floor.

Hawkins briefly got back to his feet and looked to race towards the finish before falling again on Sundale Bridge, colliding with a barrier beside the road.

It allowed Shelley to catch up and pass the stricken Scot, who had started to receive medical attention after a delay.

Shelley came through to take the victory in a time of 2 hours 16min 46sec, the slowest winning time since Kuala Lumpur 1998.

"I wasn't sure what was going on, I had a couple of mates around Main Beach who said Callum was in a bit of trouble," Shelley said.

"They told me to keep going and gave me encouragement.

"I saw him [Callum] on the Sundale Bridge and thought, 'Oh s***' and just tried to hang on.

"When I was coming down the home straight I tried to accelerate but I was just gone.

"I'm glad to be finished to be honest.

"I thought hopefully I can get to the finish line because I was starting to get cramps in my hands."

The podium was completed by Munyo Solomon Mutai of Uganda and Scotland’s Robbie Simpson, who finished in 2:19:02 and 2:19:36 respectively.

Following the race, Team Scotland announced, "Callum has been taken to hospital for medical review as standard procedure" and that there were "no major concerns at this stage".

The ending bored similarities to the 1954 Empire Games in Vancouver when England’s Jim Peters collapsed leading the event by 17 minutes heading into the finish, but collapsed after entering the Empire Stadium.

On that occasion a Scot was the beneficiary, as Joe McGhee eventually claimed victory.

The women’s race proved a less dramatic affair, Helalia Johannes of Namibia emerging as the winner.

Having been part of a four athlete leading group for much of the race, Johannes stormed clear in the final kilometres to take the victory in 2:32:40.

Australia’s Lisa Weightman and Jessica Trengrove rounded off the podium positions, the duo crossing the line in times of 2:33:23 and 2:34:09 respectively.

There was a fitting end to Kurt Fearnley’s career representing Australia, as the three-time Paralympic gold medallist claimed his second Commonwealth Games crown.

Fearnley achieved a time of 1:30:26 to win the first staging of the T54 wheelchair race to claim victory in front of a home crowd.

"Eight years ago I knew that this was going to be my last race for Australia and that has never wavered, even last night lying in my bed," Fearnley said.

"I'm going to race marathons until they bury me in a gutter, but I'm not going to push that hard again.

"It is just even more special getting to share it with the people that mean the most in the world to me.

"I have loved every minute of these Games, and I've known half of these people for decades."

England’s John Smith secured the silver medal in 1:31:44, with team-mate Simon Lawson rounding off the podium in the same time.

Madison de Rozario triumphed in the women’s race in 1:44:00, adding to the 1500 metres gold she claimed earlier in the Games.

England’s Jade Jones, winner of a Para-triathlon gold medal earlier in the Games, secured a bronze in 1:44:20.