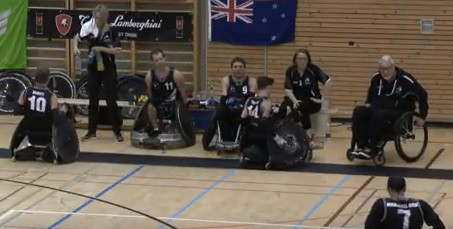 The first semi-final saw New Zealand, known as the Wheelbacks, beat Colombia, the first team to qualify for the main tournament from this competition, by a convincing 52-46 scoreline.

It was a remarkable comeback by New Zealand, the Athens 2004 Paralympic champions, who were 39-35 down going into the final quarter of the match.

Ireland booked their place in tomorrow’s final thanks to a 50-46 win over Poland, despite being 25-23 down at half-time.

All four semi-finalists had already qualified for the IWRF World Championship in Sydney this summer.

Today also saw the matches to decide the finalists for tomorrow’s fifth-place match with Korea and Brazil securing their spots in it with 45-44 and 52-51 victories over host nation Switzerland and Germany, respectively.

Switzerland and Germany will play for seventh place.

After tomorrow’s finals, the World Championship will become the main focus for the teams with Sydney hosting the event between August 5 and 10.