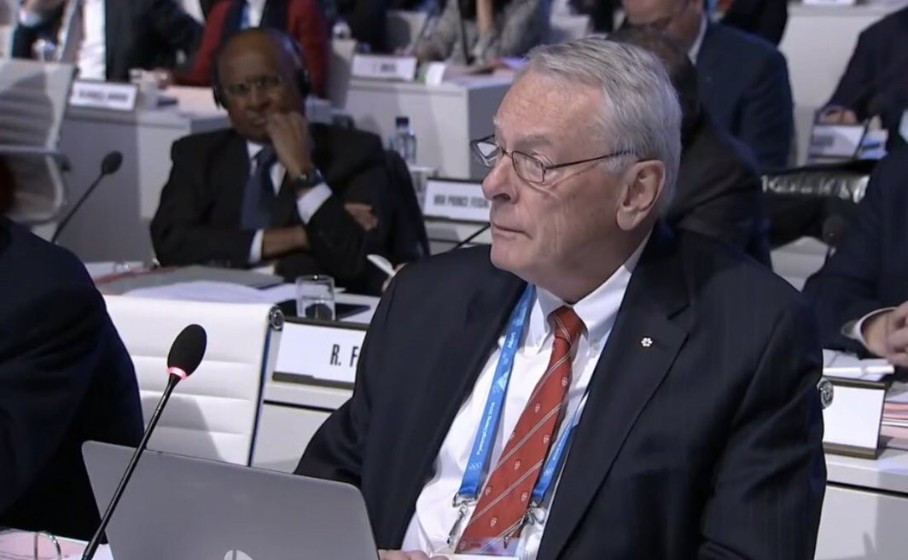 Richard Pound has accused his International Olympic Committee (IOC) colleague Gerardo Werthein of an "extraordinary attack" in a fiery exchange which followed him criticising the organisation's response to the Russian doping crisis.

It came during a three-hour discussion to open today's 132nd IOC Session which represented by far the most detailed and balanced exchange of views on the issue by the membership since concerns about the extent of doping in Russian sport first became public in 2014.

Pound and Britain's Adam Pengilly each abstained from a subsequent vote in which all other members present praised the IOC Executive Board decision to make 168 Russian athletes participate neutrally - albeit under an "Olympic Athletes from Russia" (OAR) banner - at the Winter Olympic Games due to start here on Friday (February 9).

Pound delivered a pre-written speech in which he argued that a "large proportion of the world believes the IOC has failed and let down clean athletes".

The Canadian added: "The whistleblowers have been left with no protection from the Olympic Movement and every effort has been made to give a distinctly Russian profile to the OAR team here.

"I agree we need to get Russia back in the Olympic family but on our terms, not on its terms of denial and attack.

"A large proportion of the world believes the IOC have failed and let down clean athletes.

"We talk more than we walk and, with respect, I don’t think we can talk our way out of this.

"Our future depends on what we do but not what we say.

"I speak not as an enemy but as someone wanting to help the fight against doping."

His speech was followed by an attack from Werthein, one of IOC President Thomas Bach's closest allies, leading many to believe the criticism levelled at Pound was part of an orchestrated pre-planned strategy by top officials.

The Argentinian accused of Pound of believing that "what is right is what he agree with".

Werthein added: "He then goes to the press and creates statements which creates doubt and discredits work being done."

"The fact I have different opinions from the all-powerful Executive Board is not disrespectful," he told the Session.

"I don't seek the press out, they seek me out.

"We have had 20 months of no opportunity to speak on this and I have addressed this with you [IOC President Thomas Bach] on many times."

Bach, in turn, claimed that he had met a Canadian athlete here in the Olympic Village yesterday who had praised the IOC response and thanked him for supposedly protecting clean athletes.

He also claimed that Pound had missed opportunities to make these points at IOC Sessions last year in Lausanne and Lima.

The IOC also attempted to dismiss a conspiracy theory, which Pound had given credence to by publicly speaking about it, that they deliberately lost 28 of their 39 cases against Russian athletes in the Court of Arbitration for Sport last week.

"There have been some suggestions that the IOC set-up the cases to fail," Denis Oswald, chair of the IOC Disciplinary Commission, said during his presentation.

"I find this an insult to the IOC, my Commission and myself.

"I have been a respected lawyer for many years and never has my integrity been put in question, so to read this sort of allegation is totally unacceptable."

"These allegations were unwarranted deflections and those people who made those remarks deserve condemnations," he claimed.

"To outwardly condemn what Denis' group has done is worrying.

"I believe this came out through the media.

"We know most media are fair, but we know that certain media, sometimes I ask journalists 'What do you want' and they say: 'I am looking for dirt', so they will find dirt."