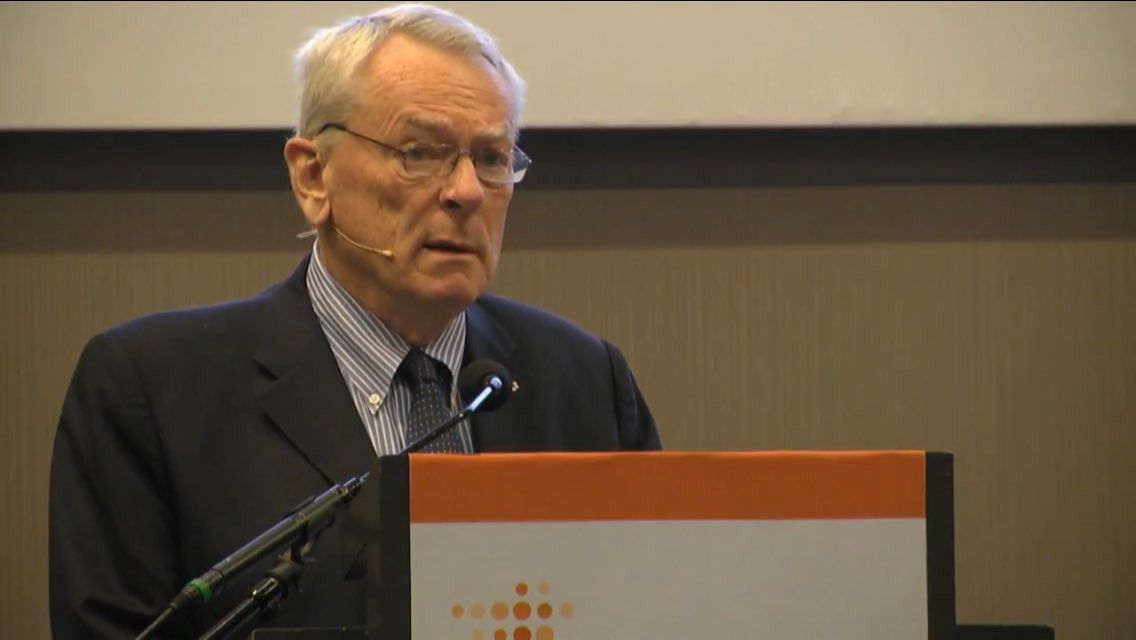 International Olympic Committee (IOC) veteran Richard Pound has launched a stinging attack on world governing bodies for only feeling pain in "their wallets" and not showing a genuine commitment to anti-doping problems.

Pound, speaking at the Play the Game conference in Eindhoven, also claimed that "nothing scared old folks [in sport] as much as athletes getting organised" before accusing the IOC of "fumbling the ball, pretty seriously" when dealing with Russian doping problems before the Rio 2016 Olympics.

The Canadian lawyer, founding President of the World Anti-Doping Agency (WADA) and the longest serving current IOC member, refrained from recommending how the Olympic Movement should sanction Russia before Pyeongchang 2018 until their two investigations are published next month.

He told delegates at the Van der Valk Hotel Eindhoven that he has had a "frank discussion" with IOC President Thomas Bach and agreed on "do my best to keep my mouth shut until then".

But Pound added that he told Bach he would only do this on the condition that the German does not "stuff it up" when eventually making a decision.

It follows allegations of doping and sample tampering by Russian athletes at their home Olympic Games in Sochi in 2014 that were first published in the WADA-commissioned McLaren Report in July 2016.

Unlike the International Association of Athletics Federations (IAAF) and International Paralympic Committee, the IOC opted against a blanket suspension of Russia at the Rio 2016 Olympic Games following publication of the McLaren Report last year.

Instead, the organisation cited the importance of "individual justice" and rubber-stamped eligibility decisions made by individual International Federations.

The IOC's Schmid and Oswald Commissions are due to finish their two investigations by the end of this month before a decision is made during an IOC Executive Board meeting in Lausanne on December 5.

So far, 14 Russians have been retrospectively disqualified from Sochi 2014 by the IOC and banned from the Olympics for life - with a first detailed reasoning behind this decision expected to be published tomorrow.

It is now thought more likely that the IOC will ultimately force Russian athletes compete under a neutral flag at Pyeongchang 2018 - something which could potentially trigger a full Russian boycott.

Pound, who had led the IAAF Commission which led to Russia being suspended from world athletics in November 215, reiterated previous criticisms about the IOC's responses before Rio 2016.

"On the question of doping, you can’t have, as my organisation, the IOC, has, say you have ‘zero tolerance for doping...zero tolerance… ooh, unless maybe it’s Russia'," he said.

"I think we fumbled the ball, pretty seriously, leading up to Rio.

"Were I the President of the IOC, I would have been down on my knees saying to Richard McLaren, ‘thank you, that’s a very very competent, thorough investigation…'

"It demonstrated the state supported system that everybody - sort of - knew was in place and we don’t have to worry so much about athlete by athlete - we’re dealing with that now that we have the database [documenting undisclosed details from the Moscow Laboratory].

"It would have been a major lesson and a major deterrent for all other countries that might be saying: ‘ooh, they're willing to do this to Russia, maybe I better be getting my act cleaned up'."

Pound, an IOC vice-president between 1987 and 1991 and from 1996 to 2000 to has failed in several recent attempts to be re-elected back onto the Executive Board, saved his strongest criticisms for Federations.

"International Sports Federations feel pain in only one place...and that’s their wallets," he declared when urging athletes to play a more active role in sports administration.

"Nothing scares these old folks as much as athletes getting organised - so don’t [athletes] stop doing that."

He then blamed International Federations for prioritising political stability over a genuine anti-doping commitment.

"I think if you look at the system we have in place through WADA - the system is pretty good and the science is pretty robust," he said.

"The problem is that you’ve got a whole bunch of people out there who don’t want it to work.

"And, if we’re in the business of being provocative, I would lay most of that blame at the foot of the International Federations.

"The prime directive in most IFs is not ‘how can we advance the sport for the benefit or present and future athletes’?

"It’s, ‘How can I get re-elected as President?’

"And you don’t get re-elected as President if you start to try and change things…so the result is ‘denial, denial, denial’."

Former IAAF President Lamine Diack is currently at the centre of a French investigation into his alleged involvement in the accepting of bribes in return for the covering up of athletics doping cases.

"Our view, I think is that every time you catch a cheater and take him or her out of the competition, it is a small victory leading to others," said Pound.

"The opposite [view] is to say: ‘Oh, well, it’s a bad reputational risk if we say there’s any doping in my sport, it might affect sponsors, television right or people’s perception of me as the President'.

"So there’s a denial...and it is just that refusal to acknowledge that this is going on…not unlike what is happening with the Russians these days."

Pound did, however, defend the Court of Arbitration for Sport as an "absolutely essential" body in response to comments about the quality of some of its decisions.

"If we go back to having state courts, where Judgments can’t be enforced unless in home countries, we are doomed," he said.