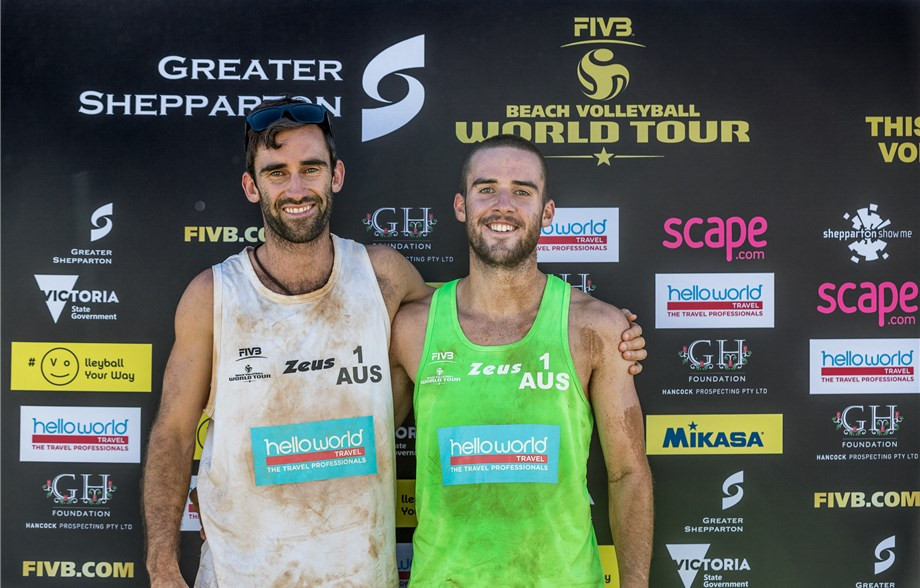 Australian brothers Damien and Justin Schumann played against each other on the first day of main round competition at the 2018 International Volleyball Federation (FIVB) Beach World Tour event in Shepparton.

It was Damien Schumann and his partner Christopher McHugh, the top seeds for the tournament, who came out on top in a competitive, albeit predictable, match between the two home teams in Pool A as they defeated Justin Schumann and Mitchell Wakefield by a 21-19, 21-18 scoreline.

Despite losing the match against his brother's team, Justin Schumann, who is 10 years the junior, was thrilled by the experience.

"It's just like super fun and exciting," he said.

"That's all I can describe it as.

"I was surprised with each point we won, put it that way."

Damien Schumann added: "I watched him grow up from a little baby.

"To see him qualify yesterday was awesome.

"To be playing him today was nerve-wracking, but it was really special.

"We were all nice before we went on the court, but as soon as the whistle started, you're just trying as hard as you can to win every point."

Thailand's Surin Jongklang and Adisorn Khaolumtarn made it through to the next round from Pool B despite losing their first match 21-23, 21-14, 15-9 to Germany's Armin Dollinger and Simon Kulzer in their first match of the day.

Their 21-15, 21-19 win in their second match against Canadian duo Felipe Humana-Paredes and Cameron Wheelan ensured they qualified.

There was a big shock in Pool C as Fijian wildcards Inia Korowale and Nacanieli Elliot defeated third seeds Paul Burnett and Joshua Court of host country Australia by a 23-21, 21-17 scoreline.

The women's event saw Yukako Suzuki and Kaho Sakaguchi of Japan go top of Pool A with a 21-17, 21-15 win against Australian wildcards Tamsin Hinchley and Christine Jenkins.

There was, however, more joy for home athletes in Pool B with second seeds Phoebe Bell and Jessyka Ngauamo defeating Japan's Yui Nagata and Minori Kumada by a 21-18, 22-20 scoreline.

Despite this loss for the Japanese duo, they still top the group after securing a simple 21-10, 21-9 win over Laite Nima and Iliseva Ratudina of Fiji.

The Pool C results also demonstrated the Japanese dominance of the women's event in Shepparton as Chiyo Suzuki and Reika Murakami confirmed their place in the elimination round with a 21-15, 21-19 victory over Australia's Brittany Kendall and Stefanie Weiler.

Pool D is set to go down to the wire with Amanda Dowdy and Irene Pollock of the United States set to fight it out with Katja Stam and Julia Wouters of The Netherlands after they both recorded shut-out victories in their matches today.