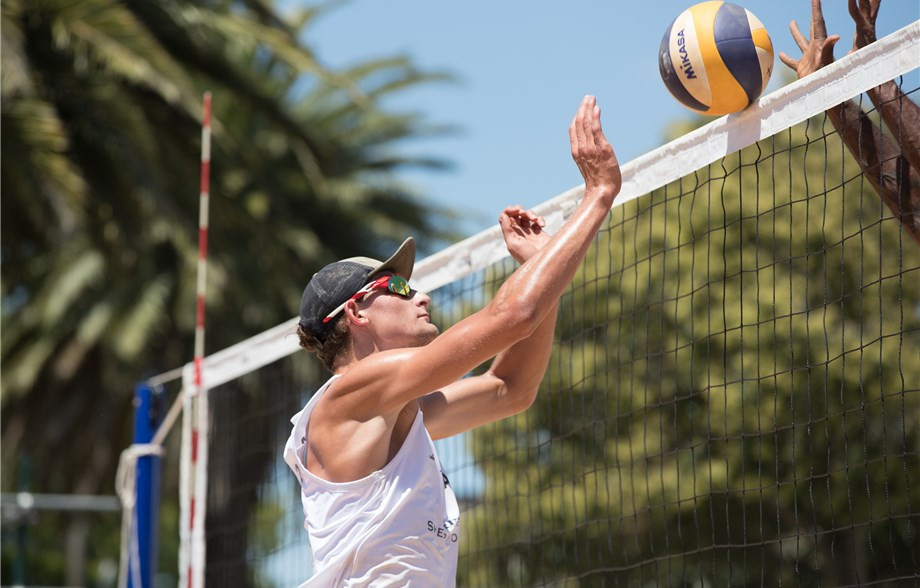 Australians Justin Schumann and Mitchell Wakefield made it through to the main draw after coming through two qualifying matches on day one of the International Volleyball Federation Beach World Tour event in Shepparton.

The duo's first qualification match saw them complete a 21-14, 21-16 victory over fellow Australians Gareth Mann and Bryce Poland, before they recorded an incredibly quick 19-minute win over Richard Kilarupa and Moha Mea of Papua New Guinea.

They beat the top seeds in the qualification round by a 21-6, 21-10 scoreline at the purpose-built beach volleyball stadium in Victoria Park.

Schumann and Wakefield were the only Australians to emerge from qualification into the men's main draw at their home tournament.

After a bye in the first qualifying round, Eric Zaun and Adam Roberts defeated Canada's Simon Fecteau-Boutin and Hugo Rosso-Bonneau 21-19, 21-19 in a tight second qualifying round match to secure their spot in the main draw.

The other American duo to come through were Chase Frishman and James Avery Drost who came out on top against two Australian teams.

Their first round match saw them record a 21-10, 21-19 victory over Casey Grice and Tim Dickson before they produced another shut-out against Mark Nicolaidis and Ky Landers with a 21-17, 21-6 win.

Japanese athletes dominated the women’s qualifying event with three of the four available qualification spots being taken by Japanese pairings.

Yukako Suzuki and Kaho Sakaguchi received a bye in the first round before defeating Cypriot duo Ariota Angelopoulou and Daria Gusarova 21-17, 21-13 in their second round qualifier to book their spot in the main draw.

Chiyo Suzuki and Reika Murakami secured victory over Denmark's Emilie Glad Bak and Laerke Mygind Gronfeldt by a 21-15, 21-9 scoreline in their first qualifying round game before knocking out qualification top seeds Loti Joe and Sherysyn Toko from Vanuatu thanks to a 21-15, 21-13 win.

The third Japanese team to secure a place were Yui Nagata and Minori Kumada who beat Sara Stief and Frederikke Schade Jensen of Denmark 21-10, 21-11 before eliminating second seeds Gaia Traballi and Agata Zuccarelli of Italy 23-21, 23-21 in the longest running match of the day.

The remaining qualifying spot was taken by Katja Stam and Julia Wouters of The Netherlands who defeated home athletes Aimee Coleman and Tiaan Smith 21-14, 21-13 before completing another shut-out against Wai Yan Yeung and Ting Chi Yuen of Hong Kong, 21-11, 21-15.

The one star competition continues tomorrow with the first pool matches taking place.