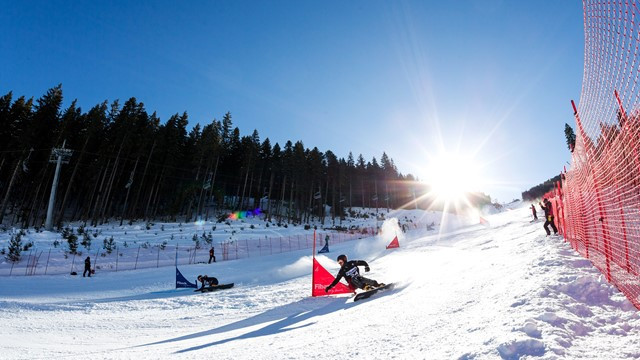 Julia Dujmovits of Austria and and Switzerland’s Nevin Galmarini ticked the box marked "Ready for the Winter Olympics" as they won the second parallel giant slalom race of the International Ski Federation (FIS) Snowboard World Cup event in Bansko in Bulgaria.

Under a blue sky and on perfectly compact snow, the competition favoured both competitors and spectators, and Dujmovits, the reigning Olympic champion, earned her season's first gold medal in beating Ramona Hofmeister of Germany in the big final.

"I wanted to become ready for the Olympics and be well prepared, and I guess I'm where I wanted to be," she said.

"It's unbelievable to walk away with a win from here.

"I really love this place, it's always such a great atmosphere and vibe here."

Hofmeister paid for a misjudgement after trying to keep the pressure high and finding it hard to handle in the last section.

But the 21-year-old has nevertheless put together an impressive pre-Pyeongchang 2018 run of four podium finishes in her six 2018 races.

She also earned the distinction of being the only rider so far this season to have beaten this winter's dominating athlete, Ester Ledecká  of the Czech Republic.

Before this event, the undisputed World Cup leader had celebrated five wins in five starts.

"My qualifiers weren't ideal that's why I was facing Ester in the quarter finals," Hofmeister said.

"But I was able to show that she is not unbeatable.

"That is for sure the icing on the cake."

Over in the men's event, Galmarini extended his World Cup lead with his second win this winter, dominating the final heat against Friday's third ranked Italian, Edwin Coratti.

"It was unbelievable, I felt so confident today,” said Galmarini.

"I won the qualifiers, and then I just went on and on.

"If I would be asked to describe a perfect snowboard day, then today was like it should look like."