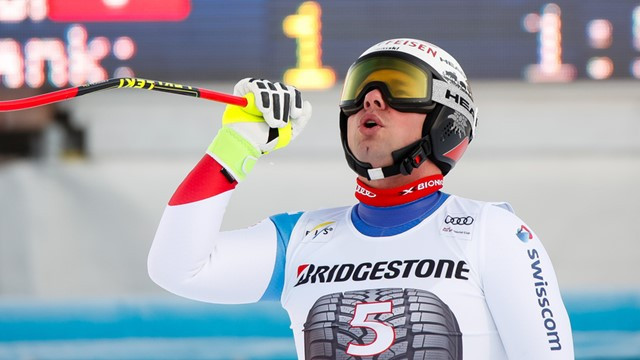 Today’s event on the Kandahar course was the last stop on the World Cup tour before Pyeongchang 2018 and the 30-year-old Feuz made it count as he finished ahead of Austria’s Vincent Kriechmayr and Dominik Paris of Italy, who tied for second place.

He was able to make up crucial time on the "free fall" section with an approximate steepness of 90 per cent, which he subsequently carried to the finish.

He is now 40 points clear in the World Cup downhill standings, with Aksel Lund Svindal of Norway his nearest challenger.

But Kriechmayr and Paris both finished just 0.18 seconds behind him.

On the challenging slope of Lenzerheide in Switzerland, Tessa Worley secured her first win of the 2017/2018 season FIS Alpine Ski World Cup season in the giant slalom, having finished in second place three times earlier this winter.

The Frenchwoman made a solid first run and then powered down her second to take the win ahead of Germany's Viktoria Rebensburg.

A steep upper pitch and difficult fallaways further down made the slope particularly tough for the world's best giant slalom skiers, of whom 18 failed to finish the first run and a further two skied out on the second.

But Meta Hrovat of Slovenia overcame the challenge to score her career-first podium finish in third.