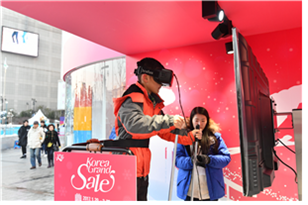 South Korea plan to hold a nationwide shopping festival to try to make it more attractive to foreign tourists to visit the country during next year's Winter Olympic Games in Pyeongchang.

The "Korea Grand Sale 2018" is due to start on January 18 and last for 42 days until February 28, three days after the Closing Ceremony of the Winter Olympics.

"As the upcoming Korea Grand Sale will be held in line with the 2018 Pyeongchang Winter Olympics, we are putting all our efforts to make a festive mood and welcome foreign visitors," Han Kyung-ah, secretary general of the Visit Korea Committee, said when launching the initiative in Seoul.

A number of experiences will be offered alongside the shopping, including the opportunity to try winter sports at ski resorts, ice rinks and indoor snow parks during Pyeongchang 2018, due to take place between February 9 and 25.

There will also be other themed events, including "night life in Korea", "K-pop", "K-culture" and "K-food".

"The event in 2018 is a good opportunity for foreigners not just to enjoy shopping but also to experience diverse sides of Korea, including sports, tourism and cultural experience," said Han.

The target areas for the new scheme include China, Hong Kong, India, Japan, Thailand, Vietnam and the United Kingdom.

Earlier this month, Seoul Metropolitan Government and the Seoul Tourism Organization released the "Discover Seoul Pass with Pyeongchang" so that visitors can tour attractions in both the capital and the areas around where the Winter Olympic and Paralympic Games are taking place.