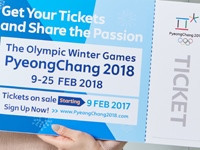 A total of 55 per cent of tickets have been sold for next year's Winter Olympic Games in Pyeongchang, it was claimed here today.

It is hoped by the time of the Opening Ceremony on February 9 that sales will have risen to 90 per cent of the 1.07 million tickets, International Olympic Committee (IOC) Executive Director for the Olympic Games Christophe Dubi revealed here.

The figure was part of a presentation by Pyeongchang 2018 to the IOC Executive Board.

The low number of tickets sold with only 65 days left until the start of the Games remains one of the biggest concerns.

But Dubi claimed optimism is growing with an average of 1,200 tickets being sold a day.

The rise in ticket sales has coincided with the arrival of the Olympic Torch on November 1 for the start of a nationwide tour around South Korea.

Figures have also been boosted by tickets being available offline for the first time since last month, with sales having been done solely online beforehand.

"I always said we have to trust the Koreans and that there would be a late surge of tickets."

International ticket sales, however, are the number distributed to the authorised ticket resellers around the world and have not necessarily been sold to the public yet.

There remain concerns about low tickets internationally because of the current security situation on the Korean Peninsula and the difficulty in finding hotel accommodation.

Dubi also did not provide any update on ticket sales for the Paralympic Games.

The last update provided by Pyeongchang 2018 last month revealed that only five per cent of the 223,353 tickets had been sold.