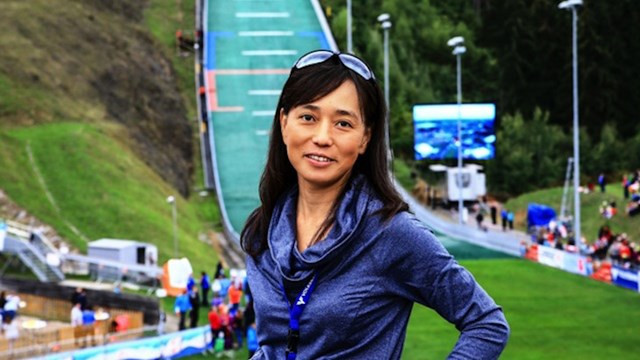 But she remains eager for more to be done to encourage younger skiiers onto the slopes.

On the eve of the start of the ladies’ FIS Ski Jumping World Cup season, in Lillehammer, Norway, Yoshida says the sport has made great strides but can do more.

"The interest of TV spectators and broadcasters to air our competitions is rising," she said.

"The trend is positive but there is still a lot of work to do.

"It is naturally difficult to find a spot in the already very crowded winter sports market.

"It takes time and patience.

"Ladies’ Ski Jumping is equally dynamic as men’s Ski Jumping and TV pictures carry the same fascination as for the men.

"But naturally, we are lacking the tradition and the superstars.

"We will continue to work hard towards reaching the level of TV exposure the ladies deserve."

With particular focus on the development of ladies’ Ski Jumping from the perspective of athlete development and marketing, Yoshida says the various National Associations have a role to play.

"It is a circle that we have to observe closely," she said.

"With rising performances, also the level of competition and media interest is rising.

"Once there is more presence in the media, we are reaching more people and attracting interest and participation among the young.

"The national level, including the National Ski Associations, plays an important role to develop the sport.

"There need to be facilities for young people to try out the sport and for those talented and interested in pursuing a career, it requires professional training opportunities."

Yoshida believes the February Pyeongchang Games will provide a terrific platform for the sport to reach greater heights.

"The Olympic Winter Games in PyeongChang are naturally the ultimate highlight of the 2017/18 season," she said.

"The fascinating and emotional images from the Sochi Games, when ladies’ Ski Jumping celebrated its Olympic debut, are still fresh and I have hardly seen an Olympic review which hasn’t featured the famous victory of Germany’s Carina Vogt and her tears of joy in the finish area.

"We look forward to making an equal contribution in Pyeongchang when ladies’ Ski Jumping will be one of 102 medal events to hit the Olympic stage with amazing stories and fascinating sports moments."

Yoshida says the quality of the women's discipline is on the rise.

"The level of ladies‘ Ski Jumping has significantly increased in the past years," she said.

"The number of participants has grown and the starting field is becoming denser.

"There is a strong fight for podium spots.

"Japanese Sara Takanashi is still our most successful athlete but everything needs to work out perfectly for her in order to make a podium.

"Two or three years ago, it was much easier for her."

The first action of the new World Cup season, in Norway, will see a new event.

Yoshida explained: "The competitions this weekend in Lillehammer will see the introduction of a new series for the ladies, the so-called ‘Lillehammer Triple’.

"The triple features competitions on the normal hill on Friday and Saturday and a final competition on the large hill on Sunday.

"The top 30 World Cup athletes will jump on the large hill which promises to be a real highlight.

"Furthermore, the Season Finals will be held in Oberstdorf, Germany, which will be another great highlight.

"For the first time, there will be two World Cup events in Germany including a stop in Hinterzarten, in mid-December.

"Overall, the general interest in ladies’ Ski Jumping is increasing, also from the side of the Organisers to host events."