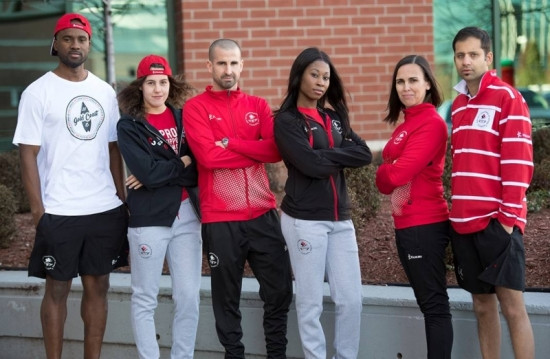 Commonwealth Games Canada (CGC) have unveiled their official team uniforms for Gold Coast 2018, with the help of athletes.

Athletics stars Farah Jacques and Sekou Kaba were among those on hand to model the uniforms, as well as Paralympic swimming medalists Aurélie Rivard and Benoit Huot.

The kit included apparel for the Opening and Closing Ceremonies, as well as casual pieces for wearing in the Athletes’ Village and other locations while at the Games in Australia.

“As an athlete, getting your team kit is such an exciting part of Games,” said Claire Carver-Dias, Canada’s Chef de Mission.

“It’s almost like a child on Christmas day opening an incredible gift package.

“And I love that the team uniform is something that stays with you long after the Games are over.”

The kit was manufactured by Kukri Sports, after CGC struck a deal with the British company in March.

Kukri has deals with several other countries and territories competing in the Commonwealth Games, including England, who wore their kit at Glasgow 2014 and have renewed the deal for Gold Coast 2018.

Jamie Williams, sales director for Kukri North America, expressed his hope the uniforms reflected both Canada and the Gold Coast.

“We want the athletes to be comfortable and able to perform at their best at the Games,” Williams said.

“We focused on performance materials, whilst also utilising the iconic Maple Leaf and Gold Coast culture to generate a unique identity that all the athletes can be proud of when they represent Team Canada.”

The kit launch continued Canada’s preparations for the Games, with triathletes and swimmers among those to have been named in their delegation to date.

The entire Canadian team will be officially announced by CGC in March.

The 2018 Games will take place between April 4 and 15, with 70 participating countries and over 4,000 athletes taking part.