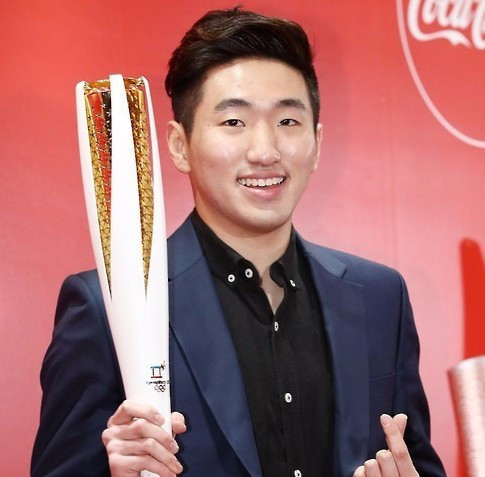 Coca-Cola, a presenting partner for the Torch relay, announced Cha and Park, winner of the individual épée at Rio 2016, will carry the Olympic flame in a group with youths from different parts of Korean society.

They are part of a group named "Dream Mentors" for the young people, ranging from aspiring football stars to equestrians and dancers.

Coca-Cola revealed Cha Bum-kun, who played 135 times for South Korea and scored a record 58 goals, will be running with nine young players from his football academy FC Chaboom.

Sean, a rapper and philanthropist, will run with students who will be rewarded for their volunteering activities at school.

The Torch is due to be lit in Ancient Olympia in Greece on October 24 and the Relay is scheduled to begin on November 1 when the countdown to the first Winter Olympics in South Korea reaches 100 days.

The route will cover 2,018 kilometers through nine provinces, eight major cities, and 151 counties and districts.

Under the slogan of "Let Everyone Shine," the Olympic Torch Relay will have five themes.

They are the same themes on which the Olympic Games themselves will also focus: the economy, the environment, IT, the arts and peace.

In Incheon, the start of the Relay, a total of 101 torch bearers, a number symbolizing the 101 days of the Torch Relay, will cross the Incheon Bridge with 2,018 Olympic supporters, covering 18.38 kilometers from Yeongjongdo Island, home to Incheon International Airport, to the Songdo business district.

On Novermber 20, the Torch will head up Bonghwa Hill at the Suncheon Bay Gardens in Jeollanam-do Province.

It will move to the Korea Advanced Institute of Science and Technology in Daejeon, where a robot will carry the Torch.

On December 25 the Torch will be at the Santa Village in Bonghwa-gun, Gyeongsangbuk-do Province, and then at Homigot Square in Pohang on January 1 as the calendar ticks over to 2018.

On January 13 the Torch will stay lit as part of a reenactment of a royal Joseon parade, known as the Eoga Haengnyeol , which runs from Gyeongbokgung Palace to Gwanghwamun Square in Seoul.

A bicycle will carry the torch along the northernmost regions of the country near the military demarcation line between January 20 and 26.

"The Torch Relay is a prelude to officially starting the Pyeongchang Olympic Games and it’s just one month away," President Lee Hee-beom of Pyeongchang 2018 said.

"We will do our utmost to make the Olympics a chance to let the world know about our glorious history and culture, and, also, to make these Games a legacy that will live on in Olympic lore."