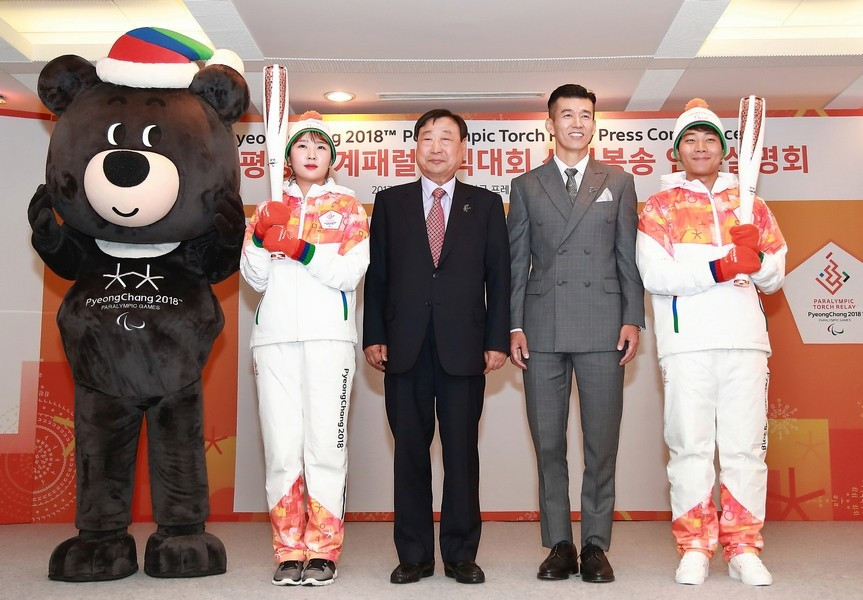 The Torch is 700 millimetres in length, representing the altitude of Pyeongchang, which sits 700 metres above sea level.

Its sleek curve was inspired by South Korea’s traditional white porcelain and the white colour is also said to represent the Winter Paralympic Games, a festival of snow and ice.

Designed in consideration of the freezing cold weather of South Korea’s winter, it is claimed the Torch can keep its flame burning even in strong wind and heavy snow.

The four Paralympic values - courage, determination, inspiration and equality - and the slogan for Pyeongchang 2018, "Passion. Connected", are also written in braille on the Torch in Korean and English.

The Torchbearer uniform is also white and adorned with designs of the Paralympic symbol and the look of the Pyeongchang 2018 Torch Relay.

The back and sleeves are made of water-repellent fabric, while the front and shoulders are waterproof.

A hybrid material has been used in order to keep the Torchbearers warm during their long journey through what are anticipated to be constantly changing weather conditions.

The Torchbearer uniform was designed by Youngone Outdoor, a clothing sponsor for Pyeongchang 2018.

It is claimed the Pyeongchang 2018 Paralympic Torch Relay embodies the Paralympic spirit, which is about creating infinite possibilities and outcomes, by incorporating the infinity symbol (∞), in the form of number "8", throughout the journey.

The flame of the Pyeongchang 2018 Winter Paralympics is due to be lit in five South Korean cities - Jeju Island, Anyang, Nonsan, Gochang, and Chungdo - on March 2, coinciding with the day of the first full moon of the Lunar New Year.

These five cities are said to provide convenient access to tourism facilities and services for people with disabilities, and are certified as "barrier-free" cities by the Korean Disabled People's Institute.

On March 3, another flame will be lit in Stoke Mandeville, the birth place of the Paralympic Games, as well as in South Korea’s capital Seoul.

The eighth city is scheduled to be announced by the end of this year.

All the cities are said to represent the Seoul 1988 Paralympics, where the Torch Relay was revived at the opening event of the celebrations.

The flames lit in these eight cities will come together at a special ceremony at the World Peace Gate in Seoul Olympic Park on March 3.

Under the theme of "Center of Shining", the ceremony will aim to deliver a message of hope to people around the world.

"The Pyeongchang 2018 Paralympic Torch Relay will be a very special event with the vision of a 'barrier-free' Relay where people of all ages and abilities can travel at ease at a number of Relay stop-over cities," Pyeongchang 2018 President Lee Hee-beom said.

"We want the Paralympic Games to ignite the passion of the nation and the Torch Relay can start the celebrations and set the scene for the nine days of world class competition that will follow."

Showcasing some of the latest technologies during the Paralympic Torch Relay, a wearable robot called "Walk-ON" will be used as one of the means of transportation to support paraplegic Torchbearers during the Relay.

The Torchbearer selection process is due to begin in late September and be led by the Pyeongchang 2018 Organising Committee and the Paralympic partners.

The screening process is set to run until December and final confirmation of those selected is scheduled to be made in February 2018.

A total of 800 Torchbearers will participate in the Relay with a further 218 supporting.

After the flame completes its cross-country journey, it will take its position in the cauldron at the Olympic Plaza on March 9.

The flame will continue to burn until the Winter Paralympics comes to a close on March 18.