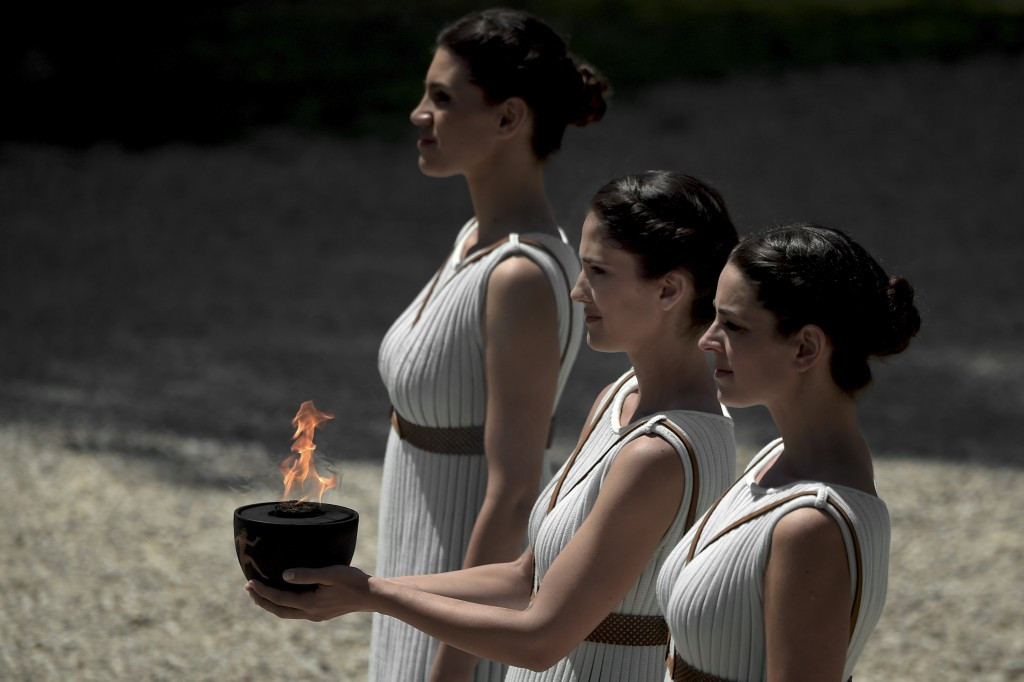 The Olympic flame for Pyeongchang 2018 will be lit at Ancient Olympia on October 24.

The flame will spend a week travelling through Greece before it is handed over to representatives of the Organising Committee in a special ceremony at the Panathinaiko Stadium in Athens on October 31.

The domestic Torch Relay will be bankrolled by The Olympic Partner sponsor Toyota, who have signed a deal with the Hellenic Olympic Committee (HOC) to provide vehicles and financial support.

Officials visited the ancient precincts, where the flame will be kindled from the rays of the sun, and were greeted by Efthymis Kotzas, the Mayor of Olympia who by tradition will deliver a welcome at the lighting ceremony.

"It is a great pleasure to be on this sacred ground for this visit which has such great significance," said HOC President Spyros Capralos.

As with the Summer Games, the Olympic flame is kindled by the High Priestess of the Goddess Hera - in reality a classical actress.

At each of the rehearsals over the previous week, a back up flame will be lit which will be retained just in case there should be no sun on the day of the ceremony.

This is a particularly wise precaution in late October when sunshine is by no means guaranteed.

It was not until 1964 that the flame was first kindled in Olympia for a Winter Games.

Though a Torch Relay was introduced in 1952, this begun at Morgedal in Norway, the symbolic home of Norwegian skier Sondre Norheim.

It came from the same point of origin in 1960 but for the 1956 Winter Games in Cortina D’Ampezzo, it was lit in Rome in a brazier sent from Olympia.

In October, the flame will be brought to the stadium in a special bowl called an amphora by a senior priestess known as the Estiada.

After a short performance of music and dance and an incantation to the goddess Apollo, the flame is handed to the first runner.

#AncientOlympia: Explaining the Lighting Ceremony of the @OlympicFlame. @pyeongchang2018 is coming up on October 24, 2017! #Olympics pic.twitter.com/Drve1E1Z7I

Typically, this is a Greek sportsman.

For Rio 2016, this honour was given to gymnast Eleftherios Petrounias who went on to become Olympic rings champion later in the year.

The first runner takes the flame from the stadium to Coubertin Grove, a tree-lined avenue with a monument to the Frenchman who revived the Olympics in the Modern Era, Pierre de Coubertin.

In recent years the flame has been exchanged outside the grove to a runner from the host nation of the Games.

In 2016 a visibly moved Giovane Gavio, Brazil’s double Olympic volleyball gold medallist, fell to his knees to receive the flame.

The Torches for South Korea are precisely 700 millimeters high, a reminder that the Olympic host of Pyeonchang is 700 metres above sea level.

The runners will wear predominantly white and gold uniforms.

The dresses worn by the dancers and heralds will be the responsibility of choreographer Artemis Ignatiou, who has already begun to assemble the cast and plan the music and dance performances.

For her it will be back to where it all began in more ways than one as she first took part in this ritual as a young dancer in 1988.

The flame was bound for Seoul that year and the ceremonies in Olympia were attended by the great 1936 Olympic Marathon runner Sohn Kee Chung.

"For the people of Korea, the flame is of particular importance because they have a long standing tradition of respect towards the flame and what it represents," said the Seoul 1988 Olympic Organising Committee.

Part of its journey was made across the straits of Salamis in a replica trireme, of the type used by the Ancient Greek Navy.

Organisers have not yet revealed if anything similar is planned this time.