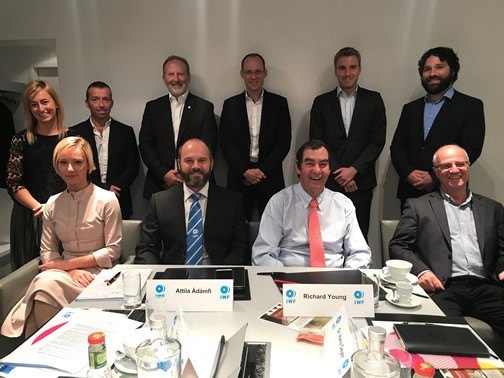 Weightlifters in China, India and the United States – the world’s three most populous countries – have all had much to celebrate in recent days, but in terms of significance to the sport none of their efforts matches those of a group anti-doping, legal and sports administration executives who met in Frankfurt yesterday and today.

Chinese athletes made some of the most impressive lifts of the year in the National Games of China in Tianjin; India dominated the Commonwealth Championships in the Gold Coast; and nearly 700 lifters competed in Grand Rapids, Michigan, in the third part of the American Open Series - taking the total number of competitors in that event to more than 2,000.

While all of this is good news, none of it would matter much if weightlifting were to lose its place on the Olympic Games programme.

That possibility was raised in June by Thomas Bach, President of the International Olympic Committee (IOC).

When the IOC carried out re-tests of samples from Beijing 2008 and London 2012, 49 weightlifters, including 30 medallists, came up positive.

Bach gave the International Weightlifting Federation (IWF) six months to present a "satisfactory" report on how it will "address the massive doping problem this sport is facing".

The second half of 2017 was described by one National Federation President as "the most important period in the history of our sport".

The experts who met in Frankfurt are tasked with advising the IWF on compiling that report for the IOC and effectively ensuring weightlifting’s survival, at least as a globally significant sport.

They were in Germany for the first meeting of the new Clean Sport Commission, announced last week by the IWF.

Three of the seven members of the Clean Sport Commission are, like Bach, German: anti-doping scientists Mario Thevis and Hans Geyer, head and deputy head of the Centre for Preventive Doping Research at the German Sports University in Cologne, and Christian Baumgartner, President of the German Weightlifting Federation.

Other members include high-ranking officials from the World Anti-Doping Agency (WADA), the Canadian Centre for Ethics in Sport, athletes’ representative Tom Goegebuer from Belgium, and the American lawyer Richard Young.

The Commission is complemented by two advisors from the Association of Summer Olympic International Federations and the IWF’s Anti-Doping Commission.

"Weightlifting is one of the oldest Olympic sports and deserves its place on the programme," said one of those involved in the meeting.

"But we have never been in such a serious situation before.

"There is one thing that could not be clearer: nobody underestimates the importance of weightlifting being an Olympic sport."

Another view was, "We have already heard a number of good ideas about our future.

Young, a partner in the global law firm Bryan Cave LLP, is a very big hitter in the legal world.

He was lead draftsman for WADA in drawing up the new World Anti-Doping Code, and represented the United States Anti-Doping Agency in high-profile cases against three of the world's most infamous doping cheats - Tour de France winners Lance Armstrong and Floyd Landis, and track athlete Marion Jones, who was stripped of five Olympic medals, including three gold, after being convicted of doping.

Young said, "The Clean Sport Commission takes its tasks seriously and what drives its work towards efficiency is the combination of people knowing weightlifting, joined by outside experts in the areas of testing, science and sports law, working together to evaluate the most state-of-the-art innovations available and find the ones which could serve the protection of the sport best."

The Commission is considering ways in which the IWF Anti-Doping Policy can be improved, as well as focusing on sample collection, analytical innovations, and spreading anti-doping education to targeted areas.

A second working group set up by the IWF, the Sport Programme Commission, is looking at ways of making weightlifting more innovative, as well as deciding which of the men’s bodyweight categories should be dropped, as requested by the IOC, from the Olympc programme for Tokyo 2020.

Attila Adamfi, the IWF director general, opened the meeting in Frankfurt by giving a comprehensive summary of the issues discussed by the Sport Programme Commission, and suggestions for future changes.

Both Commissions will report to the IWF at an Extraordinary Executive Board meeting in Bucharest on September 30 and October 1.

A third IWF Commission, created to make recommendations on sanctions for those nine nations who had three or more positives in the IOC retests, met last weekend, and will also report to the Bucharest meeting.

This Commission is expected to recommend that all nine nations be suspended for up to a year, and all be excluded from the 2017 IWF World Championships in Anaheim from November 27 until December 5.

The full list of the nine who face suspension is: Kazakhstan and Russia with 10 retest positives each, Belarus seven, Azerbaijan five, Armenia four and Turkey, Ukraine, China and Moldova three each.

More details are expected to be announced after the Executive Board meeting in Bucharest.