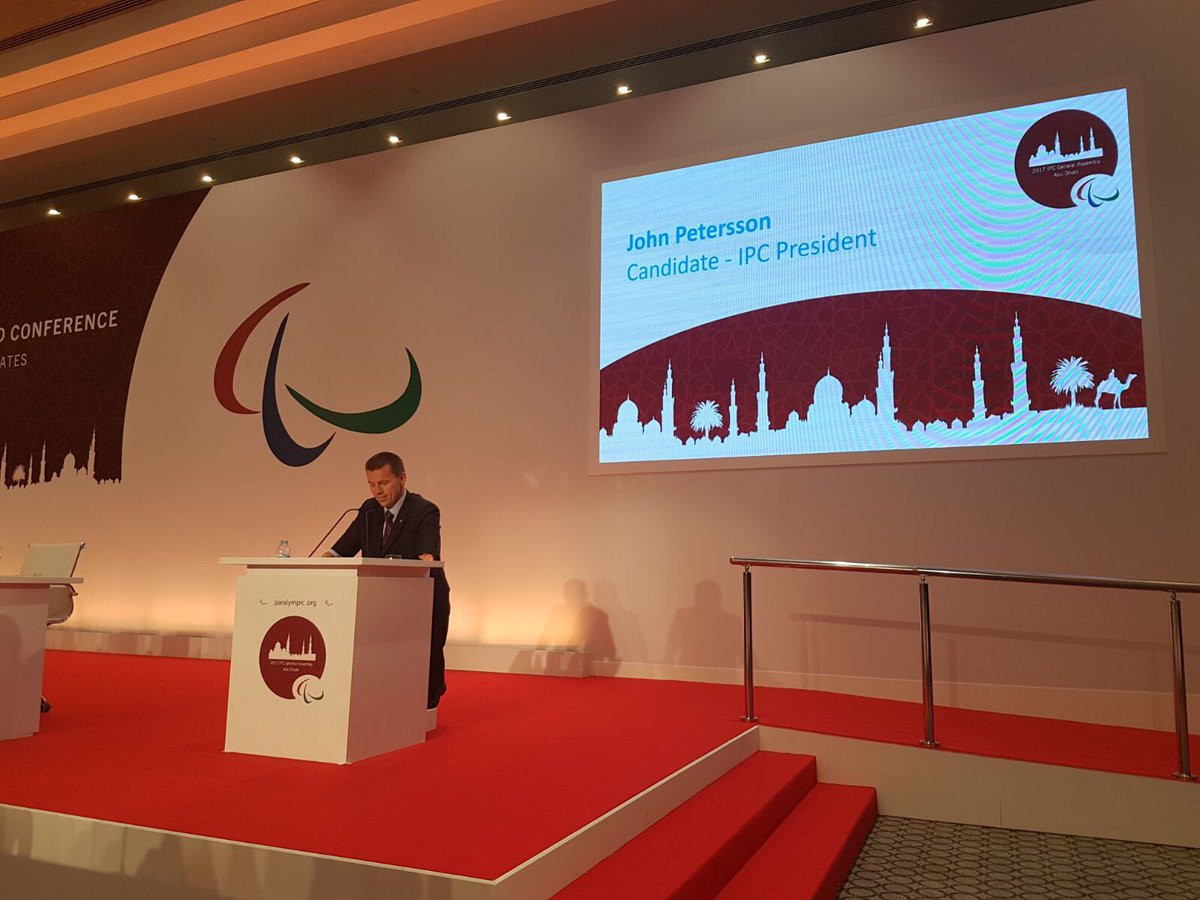 All four candidates standing to be elected the new President of the International Paralympic Committee (IPC) delivered presentations to the governing body’s membership here today as they staked their claim for the top job.

Each candidate had up to 15 minutes to present in the afternoon session with a draw taking place beforehand to determine the running order.

Drawn to go first was Zhang, followed by Jarvis, Petersson and finally Parsons.

Zhang, as President of China’s National Paralympic Committee and the chair of China Disabled Persons’ Federation, was involved in the surge of popularity of Para-sports at Beijing 2008.

She called on the voting members to trust in her capability and determination to lead the IPC and believe in her and support her.

"If I’m elected, I will unite more people under the IPC flag of all colours, races and agendas," Zhang said.

"I will see more women participating in the Paralympics and more people cheering in the arenas.

"I will further improve the management and the research within the IPC and take a rational approach to classification systems to meet diverse needs.

"I will work together with my colleagues to make the Paralympics an event of justice and morality, so that those who are willing to transcend the limits of life, bring in the loud applause.

"I will address the funding problem with my experience and ability in management so that the IPC will focus more on presenting outstanding Games.

"We will give honour to the sponsors for their support to the Paralympics.

"I will build us a strong brand for the IPC, foster brilliant athlete stars, encourage diverse culture and welcome an inclusive community."

"This is where I want to go," he said of his vision.

"We have achieved so much since our official creation in 1989 and even more so since our humble beginnings just after the Second World War, but there is more to be done.

"In my 12 years on the Governing Board, I did what I thought I was elected to do - to try and make the Movement better for everyone.

"I want to continue this journey."

At the end of his presentation, Jarvis returned to the first question he asked voting members at the beginning - "When you imagine the Paralympic Movement in five to 10 years, what do you see?"

"I see a future where the IPC is a world leading organisation and where our Movement remains full of promise," he said.

"I see a future where all our members are strong and successful.

"This is my pledge to you and to our Movement - passion, action and integrity.

"My name is Patrick Jarvis, this is who I am.

"If you believe as I do that being the best possible organisation and Movement is the destination that we can achieve together, then I am counting on your support.

Petersson, a 15-time Paralympic medallist and six-time champion in swimming, is a qualified accountant and former executive director at Ernst & Young in Copenhagen.

The Dane, who has served on the IPC Finance Committee since 2006, had previously promised to increase the body's income streams in order to maximise funds and improve benefits for athletes and nations.

He gave a more detailed plan on this today, as he said he would when speaking to insidethegames last week, in explaining his focus for his first 100 days in office if elected.

"I will have a clear action plan in place that will detail how direct and indirect support will be significantly increased and distributed to each of our members," Petersson said.

"I will also outline how we can further increase our finances in the future.

"We need to take action, we need to ensure that you receive changeable benefits for your athletes and for your organisation in your country.

"Money in the IPC is not money for the IPC President or the IPC administration - it is your money and it needs to go back to you for reinvestment and development in the Paralympic Movement worldwide.

"This is the way to guarantee growth and continued expensation."

Petersson also promised he will initiate a "look and listen" world tour to discuss members’ challenges and needs and ensure that IPC programmes are working for them.

"These two commitments come from concerns that all of you have raised these last months," he added.

"You deserve more, you deserve someone who will steer your Movement forward and I’m committed to bringing you progress before the end of 2017 and throughout my Presidency."

Widely considered to be the favourite, the Brazilian is a member of the International Olympic Committee (IOC) Coordination Commission for the 2020 Olympic and Paralympics in Tokyo and also sits on the Olympic Channel Commission.

He has prioritised a strong personal relationship with IOC President Thomas Bach if he is successful in being elected.

As well as IOC relations, he is also promising a better dialogue with members in order to identify and remedy their specific problems.

"We will make the athletes’ voice louder in our organisation," Parsons said.

"If elected President, I will start what I call open forums during competitions where athletes will have the opportunity to have dialogue with the IPC President or leadership - face-to-face directly, no barriers, asking questions, making suggestions, criticising.

"When we can do more we will do and when we cannot we will tell them why - honesty, transparency."

Parsons is the only candidate who does not have a disability.

In reference to this, he said that a candidate’s track record is more important than their background.

"It doesn’t matter if you have a disability, if you were a Paralympian or come from a developing country as I do," he said.

"What did the candidate do, when he/she had the chance?

"It’s easy to come and make some promises, but they must be realistic promises."

Parsons declined to comment when asked about an e-mail sent to insidethegames from a source, who drew attention to an article published by Folha de S.Paulo in September 2016 that reported he was under investigation for the use of public money to benefit his wife.

Also presenting today was New Zealand’s Duane Kale, up against Petersson for the IPC vice-president's role.

Kale, who incurred a disability at the age of 21 and won four Paralympic gold medals at Atlanta 1996, has previously claimed he sees more opportunities than challenges for the Paralympic Movement.

"You’ll have the reassurance that I’ll make the ideal partner to the person you decide to elect as our new President," he said in his presentation.

Kale is also one of 21 candidates for the 10 members at large positions.