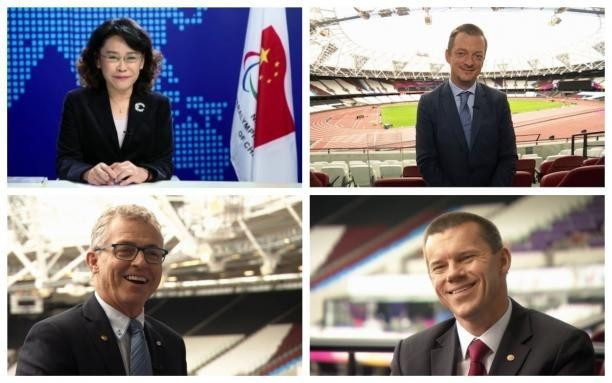 The International Paralympic Committee (IPC) General Assembly and Conference is due to begin here tomorrow with the new President of the global governing body set to be elected on the final day of the event.

The election is scheduled to take place on Friday (September 8).

Widely considered to be the favourite, the Brazilian is a member of the International Coordination Commission for the 2020 Olympic and Paralympics in Tokyo and also sits on the Olympic Channel Commission.

He has prioritised a strong personal relationship with International Olympic Committee (IOC) President Thomas Bach if he is successful in being elected.

Parsons, who also claimed that he would be a different sort of leader in some ways to Sir Philip, insisted that he would still be prepared to take different decisions to the IOC if he felt they were warranted.

But he said he would ensure that this would happen within the framework of an "open and permanent" dialogue.

It follows a tempestuous period in which Sir Philip's relationship with Bach and other IOC top brass deteriorated after the two organisations took differing decisions on how to respond to the Russian doping scandal last year before Rio 2016.

Unlike the IOC, the IPC handed the Russian Paralympic Committee (RPC) a blanket suspension, which has still not been lifted, following evidence of institutional doping at the Sochi 2014 Winter Olympics and Paralympics among other events.

The RPC’s suspension has been discussed at the IPC Governing Board meeting held here over the past two days, following an update by the IPC Taskforce on the body's progress in meeting set reinstatement criteria.

He has spoken of his desire to continually develop the body’s Athlete Classification Code in a bid to address what he considers to be one of the biggest issues of concern for Para-athletes.

Effective implementation and monitoring of the IPC Athlete Classification Code, with a focus on continuous improvement, is one of the elements he believes "will improve confidence in our system".

Improving education about anti-doping to improve compliance and taking a clear stand against all corruption in sport are among the others.

Petersson, a 15-time Paralympic medallist and six-time champion in swimming, is an active accountant and former executive director at Ernst & Young in Copenhagen.

The Dane has served on the IPC Finance Committee since 2006.

He has vowed, among other things, to work on negotiating better terms with hosts of the organisation’s General Assembly after claiming to have learned that a number of members will not be able to attend this year’s event.

Petersson claimed certain members are unable to attend "not because they are unwilling, but because their organisation simply cannot afford them to".

The 47-year-old has also previously promised to increase the body's income streams in order to maximise funds and improve benefits for athletes and nations.

Zhang, meanwhile, as President of China’s National Paralympic Committee and the chair of China Disabled Persons’ Federation, was involved in the surge of popularity of Para-sports at the Beijing 2008 Games.

The winner of the Presidential election will become just the third IPC President in the organisation's 28-year history.

All candidates standing for election to the IPC Governing Board will have an opportunity to present to the membership on Wednesday (September 6).

A new vice-president is also set to be elected, with Petersson and New Zealand’s Duane Kale the two contenders, as well as 10 members at large from a list of up to 21 candidates.

The four-day event will also see the IPC membership receive updates on a number of matters, including diversity in the Paralympic Movement, sport competitions fees and the criteria for the inclusion of sports and disciplines in future Paralympic Games.

Rio 2016 will present its post-Games report while the Organising Committees of Pyeongchang 2018, Tokyo 2020 and Beijing 2022 will deliver their latest progress reports.

Prior to Sir Philip delivering his biennial report on Thursday (September 7) morning, the IPC will officially welcome a number of new member organisations pending approval from the General Assembly.

Following a presentation on the IPC’s finances, a number of motions put forward by the membership will be discussed and decided upon.

On Thursday evening, exactly one year on from the opening of the Rio 2016 Paralympics, the Paralympic Movement will gather for the 2017 Paralympic Sport and Media Awards.

Supported by Allianz, the awards recognise and celebrate achievements by athletes, teams, officials and the media at last September’s Games.

The BP Courage Award and a number of Paralympic Orders will also be presented.