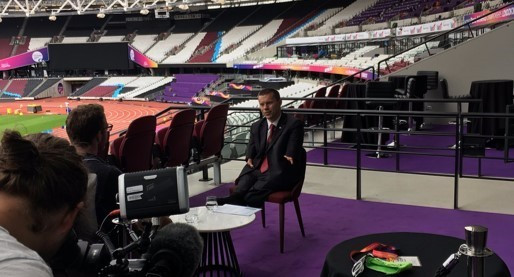 International Paralympic Committee (IPC) Presidential candidate John Petersson has expanded on his plans for a more "athlete-focused" classification system, which he intends to ensure will be developed if elected.

The Dane, a former Paralympic swimmer and winner of 15 medals, including six gold, is one of four candidates standing to replace Great Britain's Sir Philip Craven.

He is up against Brazil's Andrew Parsons, Canada's Patrick Jarvis and China's Zhang Haidi with the election due to take place here during the IPC General Assembly on Friday (September 8).

Creating an "athlete-focused" classification system is among the central themes of Petersson's manifesto.

Last August, prior to the Paralympic Games, the IPC said they had found no evidence of intentional misrepresentation - where an athlete or governing body attempts to cheat the system by gaining a more favourable classification - in swimming after they conducted a "thorough examination" of 16 cases.

Earlier this year, however, a UK Athletics review into the classification of athletes revealed some concern that the system is "open to exploitation".

"From my own experience as a Paralympian, I understand the importance of fair competition," he said.

"At the same time, it is equally important for an athlete that the value of their performance is understood by the fans and supporters.

"Therefore, if elected President I will ensure that both time and resources are made available to develop a more athlete-focused classification system."

The 47-year-old added: "Such system should take into account the unique abilities of all of our athletes and support them to both showcase their best performances and guarantee fair but also relevant competition.

"I believe that the system should be sport-specific and based on evidence, and it should be constantly monitored and improved.

"Of course, this process cannot take place without the involvement of our athletes and members.

"Having an athlete member on the IPC Classification Committee and collaboration with the IPC Athletes’ Council will be important.

"For our NPCs (National Paralympic Committees), we need to ensure they can rely on adequate support from the IPC to have all their athletes classified before Paralympic Games."

Petersson said he also believes it is important to look into the possibility of establishing a stand-alone classification organisation, which he hopes would be able to provide support to athletes and members independently.

It is claimed the grants will help to "develop sport-specific, evidence-based classification systems as defined in the 2015 IPC Athlete Classification Code".

The IPC is expecting a record attendance for the General Assembly, where the third President in the global governing body’s 28-year history is set to be elected.

Nearly 330 representatives from 167 IPC member organisations, the most ever to attend a General Assembly, are set to be here in the United Arab Emirates’ capital.

Petersson recently promised, if elected as President of the IPC, to work on negotiating better terms with hosts of the General Assembly after claiming to have learned that a number of members will not be able to attend this year’s event because of the cost.

He claimed certain members are unable to attend "not because they are unwilling, but because their organisation simply cannot afford them to".

The former European Paralympic Committee President described this as "unfortunate", adding that "only by ensuring every member has their voice heard can we make our democratic process stronger and more durable".