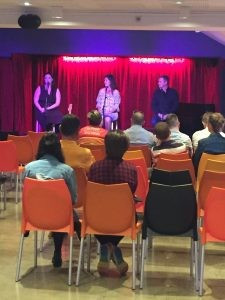 The consultation was held at the Gold Coast Arts Centre, with discussions held on a potential "Pride House" at next year’s Games.

Pride Houses are organised and delivered by community groups local to the region, with previous houses organised at the London 2012 and Rio 2016 Olympic Games, as well the Toronto 2015 Pan American Games.

Queensland Police's LGBTI liaison district coordinators, Wendy Marshall and Luke Turner, were among the attendees at the consultation in the Australian city.

The senior constables praised the turn-out.

"What was extremely pleasing to see was the community turn-out for this consultation," said Turner.

"All diverse aspects of our community were represented, ranging from our youth to our more mature seniors.

"There was a volume of activities and networking conducted on the day, all of which I believe will result in some fantastic opportunities and experiences for LGBTI athletes, visitors, international media and the wider community come the commencement of the Commonwealth Games on the Gold Coast in April 2018."

Major sporting events can be the catalyst to unite LGBTI sport and promote the cause of equality, it is claimed.

The community consultation was attended by LGBTI community members along with key organisations from the region.

These include Griffith University, The Star Casino, The Gold Coast Arts Centre and a number of LGBTI sporting groups from cities in Australia and New Zealand.

Gold Coast 2018 are taking part in an Australian-first "bench-marking programme" - The Pride in Sport Index - designed to measure the inclusion of LGBTI people within sport.

It is a legacy of the Bingham Cup, a biennial international, non-professional, gay rugby union tournament.

It allows Australian sporting organisations to determine what constitutes good practice and bench-mark their own initiatives against an external measure and other sporting bodies.

The Gold Coast 2018 Commonwealth Games will take place from April 4 to 15 next year.