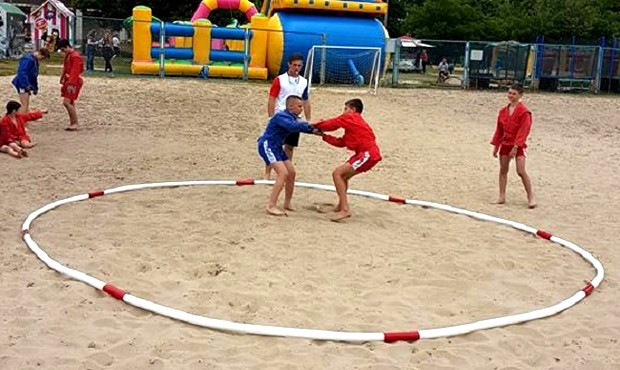 A traditional beach sambo tournament has been held in the Ukrainian city of Kharkiv.

Around 60 athletes between the ages of eight and 15 took part in the event, which was organised by a team of trainers from Ukrainian sambo club Sambist-84.

The tournament was attended by a number of honorary guests including Viktor Savinov, the former world and European champion and coach of the Ukrainian men's national team.

Tournament organisers reportedly claimed sand can be "conveniently employed as a competitive arena".

The event comes after the inaugural Lithuanian Beach Sambo Open Championships were held in the resort town of Palanga earlier this month.

Athletes representing seven Lithuanian cities, as well as their neighbours from Latvian city Liepāja, competed in the tournament.

The competition was hosted by the Palanga Sambo Academy, which is headed by Ernestas Dorzinkevicius and Adrijus Kupstas, and attracted hundreds of spectators.

It formed part of a wider three-day sambo festival, which also saw the eighth edition of the Stanislovas Kulikauskas international sambo tournament and cup competition held in Šiauliai.