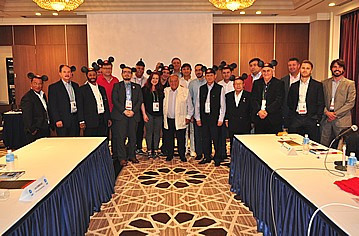 The unanimous decisions to allocate the events were made at the IWF Executive Board’s meeting in Japan’s capital Tokyo, where the 2017 Junior World Championships are scheduled to begin tomorrow.

Suva’s presentation was given by Fiji Weightlifting Association President Atma Maharaj, who was joined by Isikeli Mataitoga, Ambassador Extraordinary and Plenipotentiary of the Republic of Fiji to Japan.

It is the first time a country from the Oceania region will organise an IWF World Championships since 1993, when Melbourne in Australia hosted the senior event, and the first time on a Pacific island.

Anaheim is also due to stage the 2017 World Championships from November 28 to December 5 and, according to the global governing body, aspires to become a regular host of IWF events.

Their presentation was given by USA Weightlifting chief executive Phil Andrews, who was joined by Roy Edmondson, vice-president of sports development at Visit Anaheim.

Anaheim is located in close proximity to the Los Angeles International Airport and is home to the Disneyland Resort, with officials donning Mickey Mouse ears at the meeting to mark the awarding of the event.

"We truly appreciate the trust of the weightlifting community to host another World Championship-level event, this time for the best youth in the world," Andrews said.

"There is no better place in the US than Anaheim to hold a Youth Championship with Disneyland right across the street.

"We look forward to welcoming the world's strongest teenagers to Anaheim in two years."

The Anaheim Convention Center (ACC) will serve as the venue for the 2019 IWF Youth World Championships.

It will mark the first time ever that the United States and Anaheim will host the event.

The ACC played held wrestling competition during the 1984 Olympic Games in Los Angeles.

The IWF Youth World Championships showcases the best athletes in the world aged 17 and under.

At the 2017 edition in Thailand’s capital Bangkok, the US won two world titles.

Harrison Maurus and Clarence Cummings Jr posted youth world records on their way to victory in the respective 77 and 69 kilograms categories.

"In our aim to become a strong partner of the IWF, we appreciate the trust they put in us to host another event," Ursula Garza Papandrea, USA Weightlifting President and IWF vice-president, said.

Action is due to run until June 23.