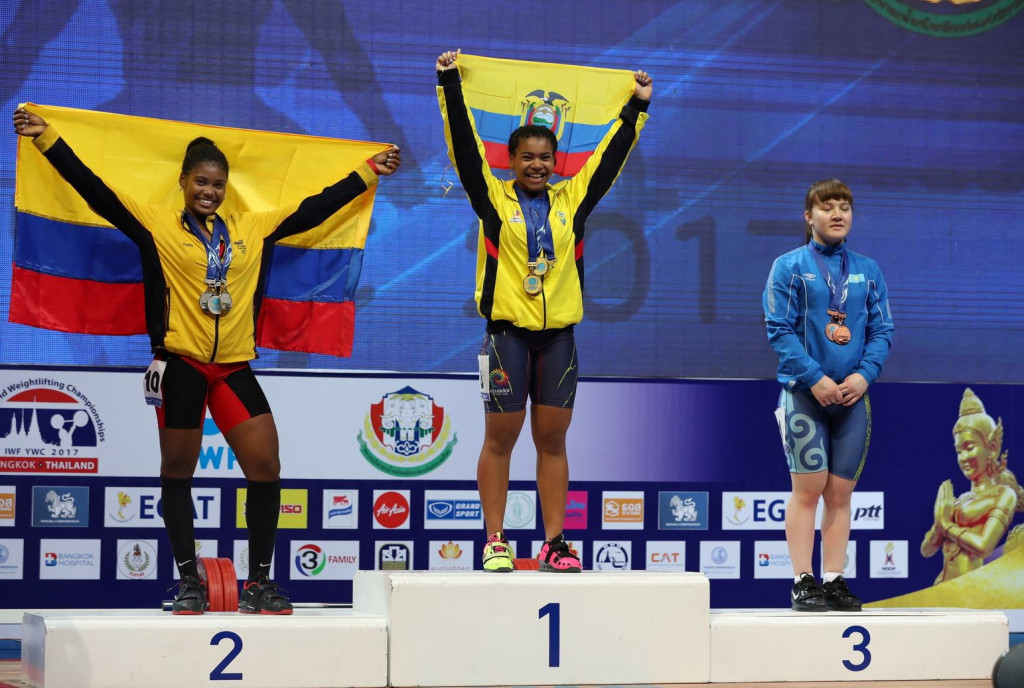 Palacios Dajomes won both the snatch with 100kg and the clean and jerk with 120kg for an unrivalled total of 220kg.

Colombia's Valeria Rivas Mosquera was her closest challenger with 209kg having finished runner-up in the snatch with 95kg and the clean and jerk with 114kg.

Rounding out the podium was Kazakhstan's Karina Kuzganbayeva, who managed a total of 207kg after coming third in the snatch with 94kg and the clean and jerk with 113kg.

In the women's 75kg competition, Kuzganbayeva's compatriot Olga Pastukhova triumphed with a total of 211kg having won the snatch with 91kg and the clean and jerk with 120kg.

Akhmadova's best snatch lift of 89kg left her trailing Gutierrez Lopez by 1kg at the halfway stage, but her best clean and jerk lift of 108kg was 2kg better than that of her Mexican counterpart and was enough to narrowly overturn the deficit.

There was also success today for Kazakhstan in the men's 85kg category as Artyom Antropov won the clean and jerk by some distance to seal overall victory.

Antropov found himself 5kg off the pace in third place after managing 138kg in the snatch, but a best clean and jerk lift of 185kg ensured a winning total of 323kg.

Poland's Bartlomiej Stefan Adamus led the way after the snatch with 143kg, however he ended up second overall with 318kg after finishing runner-up in the clean and jerk with 175kg.

Iran's Mahdi Papi took overall bronze with 304kg having ranked seventh in the snatch with 132kg and fourth in the clean and jerk with 172kg.

Despite finishing runner-up in the snatch with 139kg, Turkey's Tolga Bakici came fourth overall with 301kg after only managing 162kg in the clean and jerk.

Oman's Murshid Mohamed Murshid Al Ajmi completed the top three in the clean and jerk with 173kg, but he came fifth overall with 298kg having come 13th in the snatch with 125kg.

Action in Bangkok is due to conclude tomorrow with the men's 94kg and over 94kg categories, and the women's over 75kg division, taking centre stage.