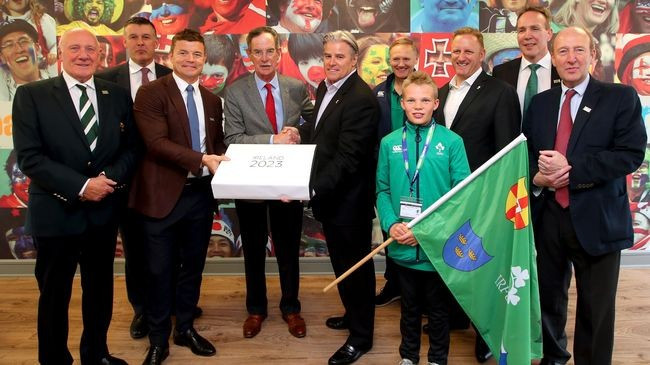 Ireland and France have today officially submitted their bids for the 2023 Rugby World Cup.

The candidature file chronicles Ireland’s attributes as a host for the event in six years’ time, including all the key Government commitments required by the international governing body.

The document also sets out the plans that the bid team claims will deliver unprecedented commercial success and help unlock and engage new audiences for rugby, including through the infrastructure of the worldwide Irish diaspora.

Among the delegation was Dick Spring, chairman of the bid’s Oversight Board, and IRFU President Stephen Hilditch.

They were joined by Shane Ross, Minister for Transport, Tourism and Sport, as well as bid ambassador Brian O’Driscoll, widely regarded as one of the greatest rugby union players of all time.

Place, who described it as a great honour to present the bid document to World Rugby chief executive Brett Gosper on behalf of all the people of Ireland, was one of 120 children carrying flags to represent every rugby-playing nation of the world.

The bid team has promised a "tournament like no other, full of Irish spirit, that will capture the imagination of the world and help to drive rugby’s global momentum".

The bid is also being backed by the Northern Ireland authorities with Belfast's Kingspan Stadium and Casement Park among those earmarked to stage games during the tournament.

Others include the Aviva Stadium and Croke Park, both of which are in Dublin, and Thomond Park in Limerick.

"This bid represents the hopes and aspirations of the entire island and is focused very firmly on the future, as symbolised by the children who were front and centre of the bid submission today," Spring said.

"It presents World Rugby with a compelling proposition that combines all the advantages of a traditional rugby market with the many opportunities of a new one.

"Rugby is hugely popular in Ireland and growing from this platform Irish sports fans will light up the tournament in the manner they have lit up so many international events around the world over the years, making it memorable for all.

"This bid is grounded in certainty through unparalleled Government support, the availability and suitability of sold-out, iconic stadiums set in the heart of cities and towns, and, of course, Ireland’s unrivalled access, through our diaspora, to the North American market.

"When one adds to that our massive tourism infrastructure, one is guaranteed a tournament like no other for World Rugby, visitors and home supporters alike."

IRFU chief executive Philip Browne insists Ireland's bid is on track despite Ross saying yesterday that a bill needed to be fast-tracked through before the Irish Parliament's summer recess in response to financial guarantees sought by World Rugby.

"We're going to deliver a unique event full of atmosphere," he said.

"There is an Irish diaspora of 70 million worldwide, particularly in North America, which is a huge market for rugby."

Hilditch, meanwhile, believes the time is right for Ireland to host a Rugby World Cup.

"Ireland has never hosted a Rugby World Cup and we believe choosing Ireland as a first-time host would be a forward-looking step for World Rugby and a signal that rugby is a truly global game for all," he said.

"We were inspired to mount this bid by New Zealand’s wonderful hosting of the 2011 tournament and believe that our 'Global Stadium' concept will bring a unique cultural dimension to the tournament, acting as a powerful catalyst to rugby’s worldwide growth.

"Our bid combines the operational benefits of a small, but dynamic and influential island with the exciting possibilities of an unprecedented international reach for World Rugby.

"It is a thrilling prospect for all."

The Parc des Princes, which hosts matches of Ligue 1 football club Paris Saint-Germain (PSG), is one of those to be dropped along with the Stade Bollaert-Delelis in Lens and Stade de la Mosson in Montpellier.

France 2023 director Claude Atcher told Paris-based news agency Agence France Presse that the Parc des Princes was cut due to a failure to be given approval from the Paris Mayor's office.

The office is bound by an occupancy agreement with Qatar Sports Investments, which completed a buyout of PSG in late 2012, and is against the idea of the stadium staging rugby matches.

Atcher has also played down worries regarding the role of the Stade de France in Paris as the focal point of the competition.

Reports earlier this week suggested organisers had yet to receive state approval for the use of the venue, which will host the final and possibly a semi-final if France is successful in its bid.

"To go back in time, historically, in the convention signed in 1995 between the state and the stadium consortium, the consortium has an obligation to host international events," Atcher told French newspaper L’Equipe.

"The Stade de France cannot oppose the will of the French state to host the 2023 Rugby World Cup.

"This agreement is subject to the agreement of the state.

"However, for some weeks now, the state has been in a situation of transfer of power and has not officially responded to the Stade de France.

"This does not mean that the state does not agree."

Other venues planned to be used in France are the Matmut Atlantique in Bordeaux, the Stade Pierre-Mauroy in Villeneuve-d'Ascq, the Parc Olympique Lyonnais, the Orange Vélodrome in Marseille, the Stade de la Beaujoire in Nantes, the Allianz Riviera in Nice, the Stadium Geoffroy-Guichard in Saint-Etienne and the Stadium de Toulouse.

South Africa is also vying to host the 2023 World Cup and submitted its bid book on Tuesday (May 30).

The winner is due to be named by World Rugby following a meeting of its ruling Council in London on November 15.