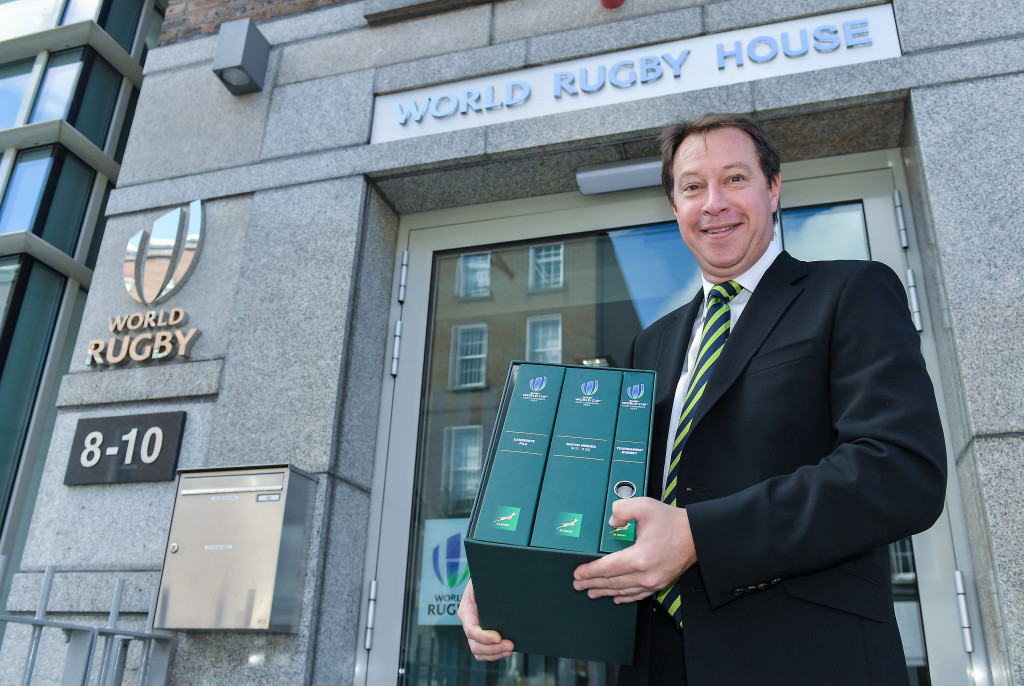 South Africa Rugby has delivered what it believes to be a winning bid to host the 2023 Rugby World Cup.

Ireland and France are also bidding to host the 2023 World Cup.

The winning bid is set to be named on November 15.

"This is a momentous day for South African rugby and in November, when the decision is made, we hope it will ignite the beginning of a six-year journey to a climatic conclusion at the National Stadium in Johannesburg in front of 84,373 spectators in the biggest and most spectacular Rugby World Cup final there has ever been," Roux said.

"South Africa has the hunger and capacity to host this tournament like no other country on earth.

"We believe we have submitted the strongest technical bid supported by world-class venues and outstanding training facilities in an ideal climate against a stunning African backdrop.

"Players will be able to perform in the ideal conditions of a dry and sunny South African spring, offering an unforgettable playing experience for players.

"We will maximise the commercial benefit for World Rugby with a low-cost, high-return event in a country that has the infrastructure and major event experience to turn on a colossal event.

"And fans and the rugby family will have the best experience of their lives, following rugby played in perfect conditions in one of the world’s leading tourist destinations where you can swim with great white sharks at breakfast, have lunch on a wine farm and dine under the stars at night at a bush camp - and all on the same day."

Roux said that the combination of infrastructure, environment and climate would allow the sport to showcase the very best it has to offer, inspiring South Africa, Africa and the world.

He added that he believed that the commercial model contained in the bid would be hard to beat, while 2.9 million match tickets would be available.

South Africa staged the World Cup in 1995, with the tournament viewed as one of the most successful in the event's history.

It was won by the host country and provided one of the most iconic pictures in sport when then South African President Nelson Mandela, wearing the team's jersey, presented the trophy to captain Francois Pienaar.

Unlike other mega-sporting events, it is claimed South Africa would profit from hosting the tournament.

"The building blocks are already in place," Roux said.

"No infrastructure spend would be required and the economic impact study we have commissioned from Grant Thornton has a good news story to tell South Africa.

"South Africa's track record of hosting premier global sporting events is unparalleled and, along with England, we are one of only two countries to have successfully hosted the FIFA World Cup, Rugby World Cup and Cricket World Cup.

"Travelling supporters were safe and secure for all three events and took away memories of incredible times in a country that many regard as the ultimate destination for a rugby tour.

"We believe that Rugby World Cup 2023 in South Africa would deliver an event with a passion and nationwide excitement to match the 1995 tournament - 28 years on."

The chances of South Africa staging the 2023 World Cup were given a significant boost earlier this month after the nation's Government reversed a suspension on hosting major sporting events.

Athletics, cricket, netball and rugby were all banned from bidding for major events last April, after their national governing bodies were deemed to have missed their transformation targets.

The targets, agreed with the Government in 2014, were aimed at increasing the amount of black people playing sport.

SA Rugby defied the suspension by submitting a bid for the 2023 World Cup in September, with the hope of convincing the Minister for Sport and Recreation to eventually support the effort.

Fikile Mbalula was replaced in the role in March as part of a major Cabinet reshuffle from President Jacob Zuma, which came shortly after Durban were stripped of its right to host the 2022 Commonwealth Games.

His successor, Thembelani Nxesi, has claimed the World Cup could leave a "huge legacy" on the country, backing the effort to host the competition following a meeting with SA Rugby officials.

The Rugby World Cup effort comes despite Durban losing the 2022 Commonwealth Games after failing to meet a number of financial commitments.

Ireland's submission for the 2023 Rugby World Cup is due to be handed in tomorrow by 11-year-old rugby player and fan Alex Place, who was selected following an online competition to become the Irish Rugby Football Union (IRFU)’s 2023 "Bid Kid".

Ulster and Ireland winger Andrew Trimble visited Alex at his home in Templepatrick to reveal he had won the competition .

He also met with the youngster's family, who will join Alex on his trip to Dublin.

"I was so shocked to see Andrew at my home and for a moment I didn't really know what was happening," Alex said.

"When he told me that I had been selected as the bid kid I was so happy.

"I just love rugby and hopefully I get selected for Ireland again and again, as I really want to play for Ulster and Ireland when I grow up.

"I can't wait to go to Dublin to hand over Ireland's bid for the Rugby World Cup.