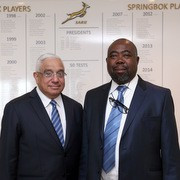 South Africa's recently appointed Sports Minister Thembelani Nxesi has claimed that hosting the 2023 Rugby World Cup could leave a "huge legacy" on the country, similar to the 2010 FIFA World Cup.

Nxesi's comments followeda visit he made to the headquarters of SA Rugby, the sport's national governing body in South Africa, in Cape Town.

"The meeting was basically a meet and greet and part of my campaign of listening and learning with all the sporting federations, finding out what their challenges are and hopefully we can help them deal with those challenges," said Nxesi.

"We know our team had a slump last year, but we believe we will go back to where we belong as South African rugby.

"If I were to draw on my experiences from the Soccer World Cup in 2010, in terms of nation building, we saw both black and white in the stands supporting Bafana Bafana and enjoying the football.

"The legacy of that tournament, among black and white, is very important.

"A big part of that legacy is the stadia which were built, which means that we have the necessary infrastructure in place already and we don’t have to start from scratch.

"It means the hosting costs would be seriously reduced and I believe that the hosting of the Rugby World Cup in 2023 can also leave a huge legacy and make a big impact, just like soccer did."

In March, Nxesi replaced Fikile Mbalula in the role of Sports Minister after Durban were stripped of its right to host the 2022 Commonwealth Games.

Nxesi's appointment was part of a major Cabinet reshuffle from President Jacob Zuma and was welcomed by the South African Sports Confederation and Olympic Committee.

Mbalula was moved to the position of Police Minister.

He had reportedly given his full support to the country's efforts to host the 2023 Rugby World Cup despite previously banning rugby, cricket, netball and athletics from bidding for events.

His backing was supposedly given to the Rugby World Cup bid during a visit to the country from World Rugby's technical review group in March.

The four sports would not be allowed to bid for major events as the national governing bodies in each had missed their transformation targets.

Various targets were agreed with the Government in 2014, aimed at increasing the amount of black people playing sport.

Despite the ban, SA Rugby submitted the necessary documents for a bid for the 2023 Rugby World Cup and had seemingly persuaded Mbalula to support the move.

South Africa last staged the Rugby World Cup in 1995, paving the way for an iconic competition that culminated in then President Nelson Mandela presenting the trophy to captain Francois Pienaar, creating one of sport's most famous images.

Ireland and France are also bidding for the 2023 tournament.