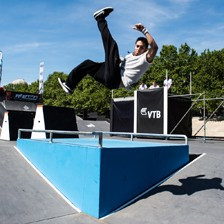 Denmark have become the latest country to complain the supposed hijacking of parkour by the International Gymnastics Federation (FIG), writing a letter to President Morinari Watanabe supporting the stance taken by their counterparts led by the United Kingdom.

Open letters have been written by Parkour Argentina and Parkour Singapore, backing Parkour UK's position on the "encroachment and misappropriation" of parkour/freerunning.

Similar moves have also been made by other parkour national governing bodies in France, Australia and New Zealand, South Africa.

In their letter, Danish-based Street Movement said: "We reject the assertions of FIG secretary general, Andre Gueisbuhler, regarding the history of parkour as inaccurate and ill-informed.

"The Danish parkour community is committed to keep this practice culturally independent and sovereign."

Last month, leading American-based group, the APEX School of Movement, signalled their opposition to FIG after initially supporting their plans.

FIG have pressed ahead with their plans to incorporate a parkour discipline into gymnastics, despite the mounting opposition from the national governing bodies and organisations,

FIG claimed it brought "smiles to the faces of athletes, spectators and students of parkour alike".

They added that "hundreds of people of all ages were introduced to parkour through dedicated classes in a dedicated place within the festival".