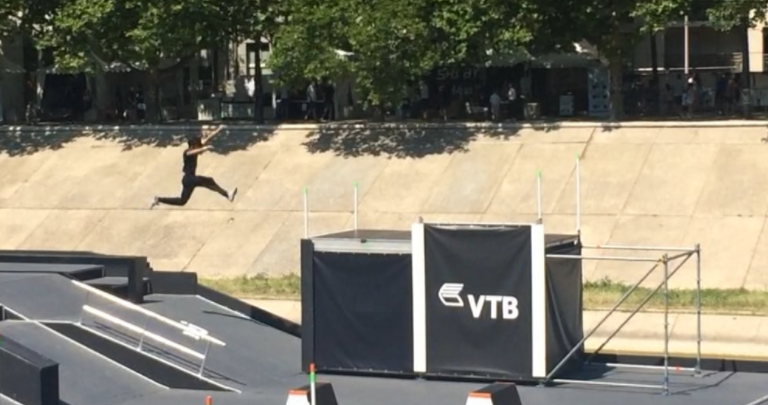 Gymnastics' world governing body have proposed the event as a new discipline with an eye to eventually being added to the Olympic programme, possibly by as soon as Tokyo 2020.

This attempt, though, has been strongly opposed by the parkour community.

They have accused FIG of "encroaching and misappropriating" parkour.

Eugene Minogue, the chief executive of Parkour UK, who has spearheaded much of the opposition, have published a document purporting to be a "Road Map for Parkour" drawn-up by FIG as part of their takeover of the sport.

It also includes the unveiling of a World Cup series in July, due to begin in 2018, as well as a detailed set of competition rules to be drawn up by October.

Under the proposed timetable, the Mouvement International du Parkour, the French organisation who claim to be the founders of the sport, would be incorporated as part of FIG.

ParkourUK, whose campaign has received widespread support from other national governing bodies, have also published an open letter calling for a Memorandum of Understanding (MoU) to be signed in order to "formally acknowledge the recognised sovereignty and integrity of parkour and freerunning".

They plan to appeal to the Court of Arbitration for Sport if such an agreement is not established within 60 days of their call for a meeting.

Documents passed to me showing @gymnastics (FIG) 'Road Map for Parkour' - include dissolving the @wethemouvement so it can merge with FIG pic.twitter.com/TQv4kLe7Gm

"As we have made transparent, reasonable and polite requests for a meeting with FIG in the spirit of mutual respect and solidarity in order to amicably resolve the concerns outlined in our open letter and this unfortunately been ignored," the letter said.

"Despite you stating the letter from FIG dated April 20 2017 - 'I do look forward to speaking with you at an appropriate juncture and in an appropriate manner'."

Earlier this month, leading American-based group, the APEX School of Movement, signalled their opposition to FIG this week after initially supporting their plans.

This included matters regarding control and protection, naming and the governance of parkour.

The row overshadowed the debut competition held today as part of the International Festival of Extreme Sports (FISE) in Montpellier.

FIG have not yet responded to insidethegames' requests to be sent results of the inaugural event.

There are currently no details of the event on the official FIG website.

FISE also did not publish any details of the event on their official website or its social media channels.

The competition did receive praise from those who witnessed it, however.

They include former table tennis world champion Jean-Philippe Gatien, now the sports director of Paris' bid for the 2024 Summer Olympic and Paralympic Games.

"Incredible athletes and impressive event," he wrote on Twitter.

The IOC had also been due to send a representative to an event they consider in line with their core themes of "innovation" and "youth appeal".

The full ParkourUK letter can be read here