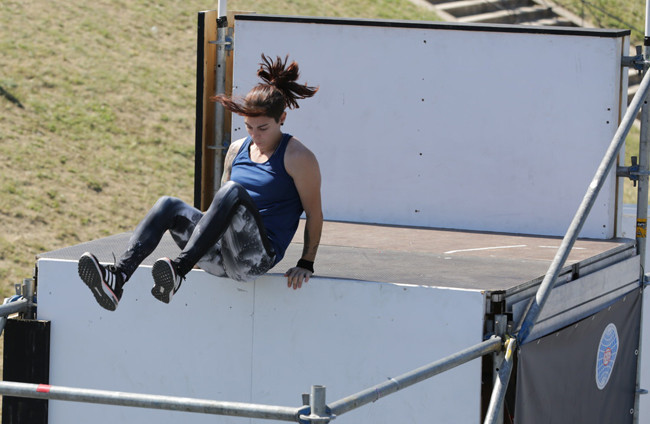 The International Gymnastics Federation (FIG) has hailed its inaugural Obstacle Course Cup in Montpellier as a "huge success" but is continuing to face claims from the parkour community it has hijacked the sport.

The Obstacle Course Cup was held on Sunday (May 28) as part of the International Festival of Extreme Sports (FISE) in the French city.

FIG claimed it brought "smiles to the faces of athletes, spectators and students of parkour alike".

They added that "hundreds of people of all ages were introduced to parkour through dedicated classes in a dedicated place within the festival".

"This weekend was a very big step forward for parkour," the sport's founder David Belle said.

"The creation of enterprises around parkour, the creation of institutions and the development of competitions have always represented the biggest turning point for parkour, potentially for good or for bad.

"From what I saw in Montpellier, we have broken the first jump.

"And the most important part for me was to see a positive link between competition and learning.

"The athletes clearly made a huge impact on the spectators and many went directly to the teaching area to start their own jumps right away."

FIG has proposed parkour as a new discipline hoping for it to be added to the Olympic programme, possibly by as soon as Tokyo 2020.

Their campaign, though, has been strongly opposed by the parkour community.

Eugene Minogue, chief executive of Parkour UK, leading much of the opposition, has published a document purporting to be a "Road Map for Parkour" drawn-up by FIG as part of their plans for the sport.

Parkour UK, whose campaign has received widespread support from other national governing bodies, has also published an open letter calling for a Memorandum of Understanding to be signed in order to "formally acknowledge the recognised sovereignty and integrity of parkour and freerunning".

They plan to appeal to the Court of Arbitration for Sport if such an agreement is not established within 60 days of their call for a meeting.

Parkour Argentina and Parkour Singapore are the latest to show their support for Parkour UK's position on the "encroachment and misappropriation" of parkour/freerunning.

"It is our duty to look after the rights and interests of the practitioners in Argentina and ensure that our practice is not misappropriated by FIG internationally and/or nationally by any of FIG’s National Federation members," Parkour Argentina's letter read.

"As such, we assert the independence of parkour as a characteristically unique, culturally distinct and sovereign practice for which FIG is neither presently representative, nor does it have grounds to claim representation, of the international parkour community."

Parkour Singapore’s letter, signed by chairman Nyan Lin Cho and vice-chairman Jonathan Tan, stated: "The Singaporean parkour community stands against FIG and any of its National Federation members’ attempts at misappropriating and encroaching upon parkour.

"We have not sought to establish a relationship with FIG and do not recognise your campaign as honourable or legitimate."

Earlier this month, leading American-based group, the APEX School of Movement, signalled their opposition to FIG after initially supporting their plans.

The row overshadowed the debut competition held at the FISE in Montpellier, where competitions were held in sprint and freestyle.

At the suggestion of Belle and Charles Perrière, President of the Mouvement International du Parkour, and in agreement with the athletes, prize money was split equally.

During the course of the FISE, a FIG delegation led by Watanabe, together with Belle and Perrière, held extensive meetings with the athletes, organisers and representatives of the international parkour community who came to the event.

Between them, those in attendance came from more than 20 countries.

"It was important to be able to discuss the best way for FIG to support the development of parkour, because it is clear to us that FIG’s approach is one of empowering all those who are interested in working with them," Perrière said.

"I have no doubt that FIG would like to make our framework and resources available, creating opportunities for the movement we started everywhere in the world."

Watanabe added: "From the moment I first saw parkour in Yokahama in 2011, I was convinced of its potential.

"More recently, I was very happy to see FIG's National Federations helping support the development of this discipline.

"And now, especially after this weekend, I am very happy to be able to offer FIG's support for the development of parkour, and for related competitions in the future.

"It was a pleasure to have David Belle and Charles Perrière alongside us throughout.

"The FIG has the highest respect for the history and philosophy of parkour and its founders."

FIG says it will continue to look at mechanisms for engaging and communicating with all those interested in collaborating.

The body points out it has already invited related International Federations to its headquarters in Lausanne, including the World Freerunning and Parkour Federation, the Fédération Internationale des Arts Du Déplacement and the International Obstacle Sports Federation.