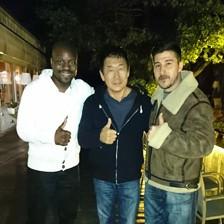 The trio met in French capital Paris as part of the process of developing a new discipline within the federation.

They are now expected to attend the FISE series event in Montpellier, a large urban sports festival serving as a model for a proposed urban cluster at the Tokyo 2020 Olympics and future Games with competitions going on in the process.

Representatives from the International Olympic Committee (IOC) will be present to observe the new trends in view of the Games in three years.

However, tomorrow will see the first parkour competition under the FIG's control take place.

It will feature obstacle course competitions alongside parkour classes for spectators and visitors.

“David, Charles and I came together as three people with respect for each other’s ideals and history," said Watanabe.

"We sensed that we had much in common, as men with a profound love of sport and physical activity.

“FIG’s approach is one of empowerment, and great respect for the history and culture of parkour and what better way to demonstrate this than by empowering the founder of parkour.

“But FIG also understands that parkour and obstacle course competitions are already organised in many places.

"I have committed to David and Charles to work carefully with all those who have already been inspired to develop parkour and obstacle competitions respectfully in their own countries."

Earlier this month, the FIG gave its approval in principle for a new discipline in gymnastics based on obstacle course competitions.

However, since the announcement, the FIG has continued to face accusations of "encroachment and misappropriation" into the sport.

Last month, Parkour UK called for the signing of an Memorandum of Understanding (MoU), which would "formally acknowledge the recognised sovereignty of parkour/freerunning".

Earlier this month, the Australian Parkour Association also showed its support for the "encroachment and misappropriation" claims.

Professional parkour group APEX School of Movement ended its collaboration with the FIG, citing "a lot of conflicting information" that has surfaced.

This included matters regarding control and protection, naming and the governance of parkour.

It is signed by founders and owners Amos Rendao and Ryan Ford, and assistant general manager Brandon Douglass.

"In all relevant media relating to FIG, there has been hardly any mention of APEX in bringing our sport to Montpellier on the Olympic pathway, adding to suspicions that we may be eventually pushed out," the statement read.