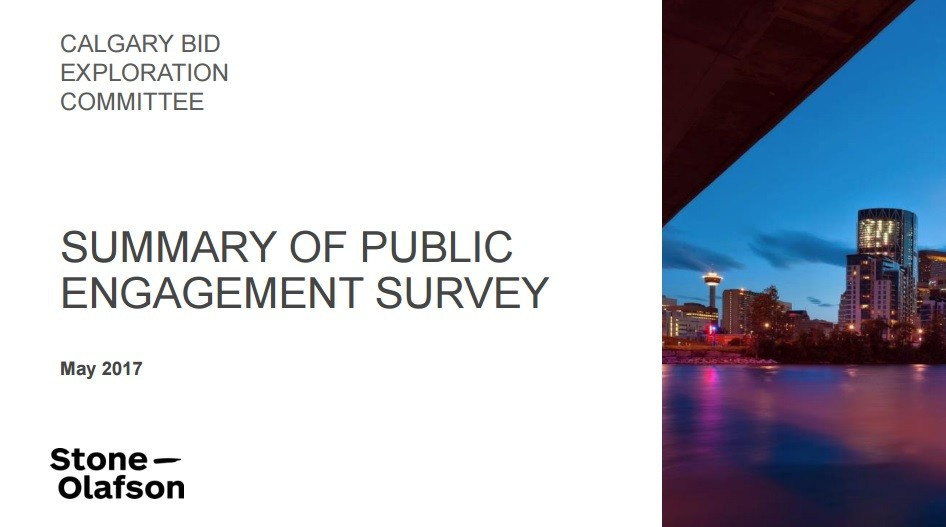 A survey from the Calgary Bid Exploration Committee (CBEC) has revealed nearly two thirds of the 1,949 respondents were in favour of the city's potential bid for the 2026 Winter Olympic Games.

The survey, conducted by research consulting firm Stone-Olafson, asked people from Calgary, Canmore, Banff and Cochrane whether they would support an effort to bring the Games back to the Canadian city for the first time since 1988.

Thirty-two per cent of those surveyed said they "strongly supported" a bid, while the same number "support" Calgary possibly entering the race for the 2026 event.

A total of 17 per cent were opposed, eight per cent of which were "strongly" against the idea.

Four per cent said they were not sure and 15 per cent responded that they were indifferent.

Transportation and housing, economic health and Government finances and debt levels were among the key concerns flagged by the survey.

The results will be featured in the Bid Exploration Committee report to the City Council on July 24.

The result marks a boost to Calgary's hopes of submitting a candidacy for the Games, although previous candidates - such as Budapest 2024 - have had similar support before being forced to withdraw amid a threat of a referendum.

"There is tremendous value in not only gathering, but truly understanding the opinions of Calgarians and area residents," said Hanson.

"As a Committee, we are invested in putting Calgary’s vision first.

"This means looking into every opportunity and concern identified by citizens during the bid exploration process."

Amid the other results were that 57 per cent were in favour of the cost of submitting a bid, regardless of whether Calgary was successful or not.

The cost of bidding has been highlighted by the International Olympic Committee (IOC) as an area for improvement following a spate of withdrawals in the races the 2022 and 2024 editions of the Games.

The survey came after the CBEC claimed last month that the city would need two full-sized arenas in order to host the 2026 Winter Olympic and Paralympic Games, and could reduce costs by using clusters of venues.

Calgary already has one major sports arena, the Scotiabank Saddledome, a key venue used when the Canadian city last hosted the Winter Olympics in 1988.

The CBEC have admitted, however, that they would require another arena to be able to stage the event for a second time.

A project entitled CalgaryNEXT remains in the pipeline after the City Council refused to label the plans as dead.

The Council also voted to continue to explore an arena replacement in Victoria Park, located just north of the Saddledome.

The CBEC added they had calculated an average cost of CAD$3.2 billion (£1.8 billion/$2.3 billion/€2.1 billion) to stage the Winter Olympics.

The Committee conducted an analysis based on previous Games - Vancouver 2010, Turin 2006 and Salt Lake City 2002.

They claimed Sochi 2014 was an "outlier" and not comparable to a bid from Calgary due to the cost of the event in the Russian city, thought to be around $51 billion (£39 billion/€47 billion).

The full survey can be found here.