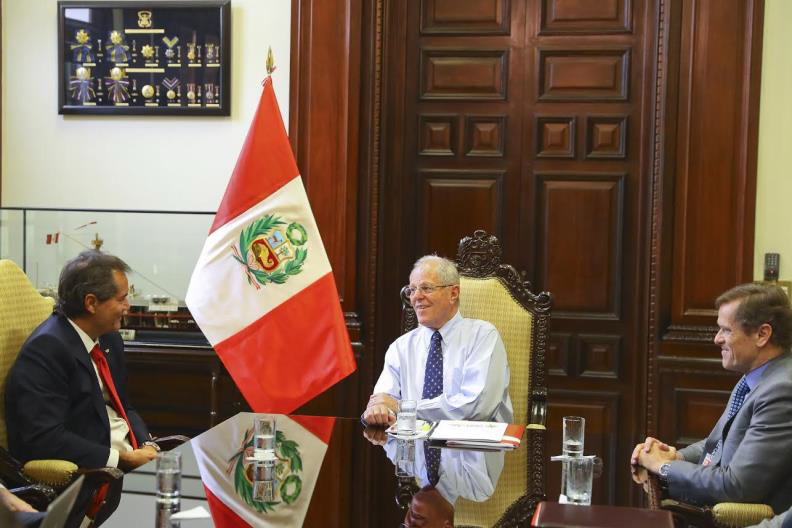 Chile's Ilic, who was elected into his role last week, has wasted little time in travelling to Peru to inspect progress before the next edition of the Pan American Games.

Serious concerns have been raised regarding the event in two years' time, including construction progress at the Athletes' Village and other key venues.

Poor leadership from organisers and a lack of individuals clearly responsible for key areas, including marketing and technology, has also been highlighted.

The low number of sports proposed to be broadcast is another concern, along with an apparent breakdown in relations between the Peruvian Olympic Committee (COP) and the Government.

However, a statement today from PASO expressed confidence that the Games would have full political backing.

"Kuczynski and Ilic discussed the organisation of the Pan American Games and the great legacy that the international event, that brings together 41 national delegations from the American continent, will leave behind.

"The President of the Republic expressed that his Government will fully back the Games and will give total support to the Organising Committee headed by Carlos Neuhaus.

"The President of PASO extended a warm greeting from the whole Pan American Sports Organization, that met just last week in Punta del Este, Uruguay, to the President of Peru and conveyed everyone's desire for a successful delivery of the Games in Lima.

"Ilic promised his full support to the organisation in Peru and that is why he decided to come directly to Lima in order to get a detailed account of the current status of the organisation of the Games and announced that he will return next week with his Executive Board, demonstrating the commitment PASO has with the Lima 2019 Pan American Games.

"The Pan American Games are the most important event in the continent and Lima 2019 will witness 39 different sports in which many athletes will be seeking to qualify to the Tokyo 2020 Olympic Games.

"The eyes of the world will be in Peru in 2019 and that will bring great benefits to sports, tourism, business and social and urban infrastructure in Lima, leaving an important legacy to the capital city and to the entire nation."

Ilic said preparations for Lima 2019 was his number one priority following his election as the head of PASO, where he defeated Brazil's Carlos Nuzman and the Dominican Republic's José Joaquín Puello.

In March, calls were made to cancel the Games as flooding rocked Peru.

Critics said the money required would be better spent on the relief effort, but Kuczynski said it would be a "tragedy" should they be removed from the country.

Last month, the United Kingdom became the main delivery partner of the Games after an agreement was signed by the British and Peruvian Governments.

The deal, due to continue until the end of the event in two years, will see a team of experts from the UK work closely with the Organising Committee to ensure the successful staging of the competition.

The agreement, signed by International Trade Minister Greg Hands, has been described as "fundamental to our progress in successfully organising and delivering the Lima 2019 Games" by Neuhaus.

UK companies are now set to secure contracts in areas such as event management, security and construction under the deal, signed as part of the Peruvian Government's special project for the planning and development of Lima 2019 and the UK’s Department for International Trade.